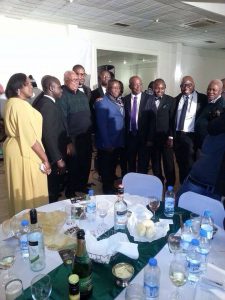 I have always told few of my foreign friends that whatever they read about Sierra Leone and Sierra Leoneans, Sierra Leone is a very hospitable country and the majority of Sierra Leoneans are very generous, compassionate and caring.
So the Ebola Charity Dinner organised by the Young Generation of the SLPP UK and Ireland no doubt showcased that generosity, compassion and caring nature of Sierra Leoneans. The event in London attracted Sierra Leoneans across England from Manchester to Birmingham to Reading and many Sierra Leonean professionals in the United Kingdom. The speeches, video footages  and fundraising could have left no one in doubt that Sierra Leoneans in the diaspora care very passionate about the on-going devastation from the ebola outbreak especially about those whose lives been turned apart.
Even from the start of the programme it was sombre as I recited the names of all the deceased medical doctors whilst the audience stood for a minute silence remembering them and the many other health workers and over a thousand citizens we have lost. The Young Generation leader, Ishmael Kebbay Jr, followed that up in his opening address by narrating the sad story of Joseph Munu (10 years old) and his little sister, Victoria, and young brother, Joshua; three of them are now orphans after they lost both their mother and father. Their story represents the unfading scar which this Ebola outbreak has created that thousands of children will have to live the rest of their lives without their mothers and/or fathers. So Ishmael asked the audience to reflect on the lives of those children. 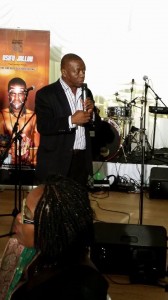 There were two special guest speakers at the event apart from the politicians – the fundraising manager of Street Child, Emma Taylor and renowned Sierra Leonean film maker Sorious Samura. The soft spoken Emma Taylor spoke about the work of Street Child in Sierra Leone and the many activities they have embarked on to provide support and care for ebola orphans. As I have written many times in previous pieces that Street Child has pledged to support 2,000 ebola orphans, there are huge challenges in terms of funding which was why Emma also used her speech to commend the fundraising event as a Sierra Leonean young people led initiative. She also used her presentation to show a gripping four minutes video of Dauda Fullah who lost both his father and step mother from the ebola virus. Dauda also became infected but fortunately survived the virus. It was emotional.
And if there is any more reason for us to be ever prouder of some of our journalists especially at the international stage then Sorious Samura made a good case. During his statement, Sorious made the point so poignant that the ebola outbreak is a very serious issue and we should address it above party politics. He also used the opportunity to inform the audience about his pending filming project related to Ebola in Sierra Leone. Sorious ended his presentation with his recent film featuring the human tragedy ebola has caused in Liberia.
But for an event organised by the Young Generation of the SLPP it was always going to be difficult to completely devoid it from politics. Just on that, it was also important to note that in attendance were also representatives of the APC UK and Ireland. The political diversity of the audience also encapsulated reputable organisations including the Prince of Peace headed by Mohamed 91 Sesay who is also a potential Chairman Aspirant for the APC UK & Ireland and in attendance was also the Secretary General, AWOL UK, Adams Bangura.
Also at the night was a statement by the Chairman SLPP UK and Ireland, Jimmy B. Songa. Chairman Songa saluted the gallantry and patriotism of health workers who have died and those who continue to work at the frontline to contain the virus. But he could not mince his words when he said “Those who have the constitutional as well as the institutional responsibility of managing resources meant for the fight against Ebola, have a responsibility to honestly use those resources towards the eradication of this disease.” It was a great speech.
The evidence that the ebola charity dinner has united Sierra Leoneans from different professions, parts of UK and across politics became more glaring when it came to three of the SLPP flagbearer candidates. No doubts, they showed that despite the SLPP internal politics, they are united at least for the fight against ebola and more important the effects of ebola on the country. 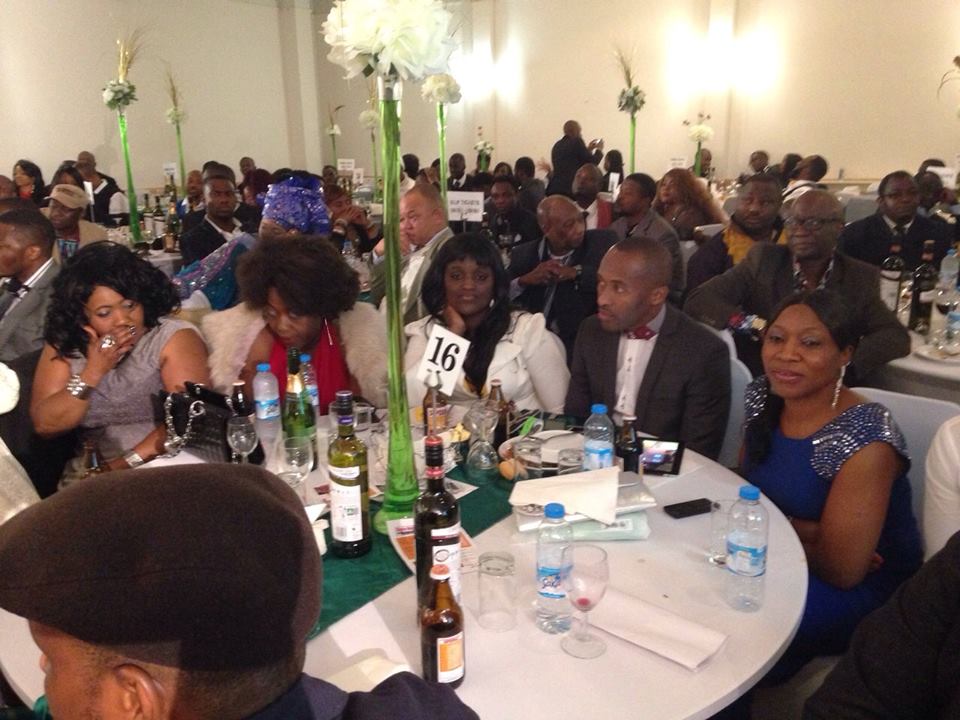 For Mr. John O. Benjamin, as the former finance Minister in SLPP, he spoke on the effects of the Ebola on the economy. He could not let go the temptation of telling the audience that in 2007, SLPP left a sound economy for APC with Le 543 billion but under the management of the APC the economy is now in a very bad shape which has been made worst by the ebola outbreak. Even the most celebrated APC supporter will not deny that the economy is in bad shape.
For Mr. Andrew Keilie, his statement touched on the impacts of the ebola on the private sector as a man who has spent many years in that sector. Whilst categorising many of the effects on the Ebola outbreak on the private sector, he used the evidence of the mining sector which has seen many job losses since the outbreak. I doubt whether anyone can disagree with Mr. Andrew Keilie. 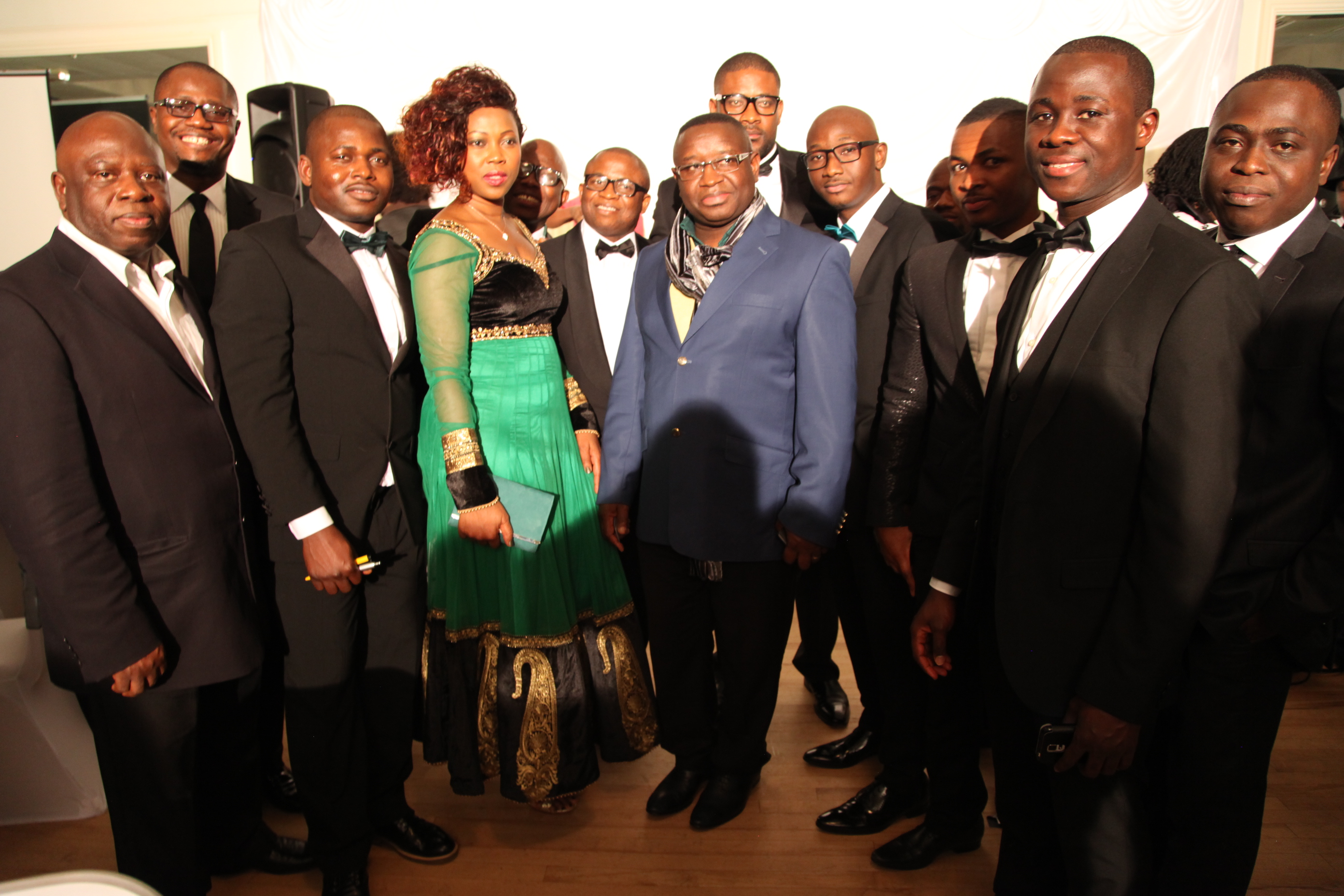 Unlike the statements of Mr. John O. Benjamin and Mr. Andrew Keilie, the Rtd. Brig. Julius Maada Bio chose to do a PowerPoint Presentation as it was one of the high-points of the event. It reminds me of a politician who has also become very academic as he pursues his doctorate degree programme. In his presentation, Maada Bio focused on key thematic issues in the fight against Ebola and the post ebola Sierra Leone. Some of the key thematic issues he spoke about were: Making a distinction between the spread of the virus and the spread of fear; The threat of the disease to global health security and public health emergency; The stigmatisation of countries and peoples affected by Ebola; Leadership failure at national level and bad governance; Profiting from the Ebola Crisis; Impacts of Ebola on Fragile states and poor communities; The Nigeria success story and The Gender Perspective of Ebola making the case for women as the voiceless victims. In his detailed presentation, Maada Bio proffered two suggestions for a post ebola Sierra Leone focusing on Gender Competent Approaches and these are: Strengthening the capacities of women and communities to create rural networks for affected ebola families and Providing effective psychosocial support and reintegration of families affected by Ebola. It was a detailed and very educative presentation from a man who has a wealth of experience as a former head of state.
For SLPP party politics, it was very refreshing to see that from the three flagbearer contenders, there was the sense that they are hungry for peace and unity within the party. And that was shown by the willingness of the three politicians to take a group photo which was initiated by Chairman Jimmy Songa and the exchange of greetings. And that group photo triggered an unbelievable joy and excitement amongst the SLPP members most notably the Chairman of the Elders Council, Steven Swaray as it shows that many SLPP members have been exhausted with the endless political fist-fights within the party especially at a time when majority of Sierra Leoneans now look up to the SLPP as the only saving grace to rescue the country.
But restoring peace and unity within a party and making it fit for governance goes beyond just a group picture, it is also about having a sincere and honest dialogue (I really mean Sincere and Honest) amongst party stakeholders and at the heart of that dialogue should be three primary determinants: the interest of the country, the interest of the party and the interest of the grassroot members who will knock on doors during elections in villages and communities to campaign.
One of the highlights of the event was also the fundraising session which was facilitated by Mrs. Fatima Maada Bio. She was fabulous in using her acting charm to raise money for a good cause and the highest amount of pledge announced for the night for the Ebola Orphans came from Rtd. Brig. Julius Maada Bio and his wife, Mrs. Fatima Maada Bio. Now, the most difficult journey for the Young Generation Financial Secretary, Joseph Munda Sandi is to follow up on those pledges and make the donation to Street Child so that by Christmas some of  those Ebola orphans in Sierra Leone will have a big smile on their faces. There were also many performances during the night from Alim Kamara, Usifu Jalloh and Showers Jalloh and the MC for the night was the talented, H.E Tommy Massaquoi.