There has been a seismic shift in power in the National Executive Council (NEC) of Sierra Leone’s main opposition SLPP party tonight, after the council voted at its meeting in the Miatta Conference Hall in Freetown to expel and suspend some of its most senior executive members.

Among the list of those that have tonight fallen on their swords are Dr. Prince Harding, who just few weeks ago was unconstitutionally appointed at an irregularly convened meeting of the NEC to replace the elected and long serving chairman chief Somano Kapen, in what was described by the Sierra Leone Telegraph as a palace coup.

Somano Kapen had been suspended pending investigations, after he was accused of misconduct in office. Tonight however, he has not been reinstated as party chairman.

But Dr. Prince Harding has been expelled and replaced by Joseph Maada Kpulun as the party’s new interim chairman. Prince Harding was the substantive Deputy Chairman and Leader of the party, prior to the unlawful suspension of Kapen. 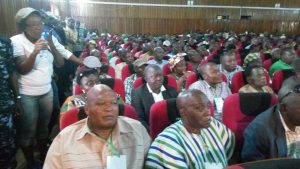 Also expelled is the veteran politician whom many considered to have been one of the chief architects of the palace coup against chief Kapen – Dr. Abass Bundu.

Bundu is understood to have read out, confirmed and justified the unceremonious suspension of chief Kapen at the NEC meeting a few weeks ago. But tonight he has fallen on his own sword.

Another executive who has also fallen on his sword is the national publicity secretary – Lahai Lawrence Leema. He has tonight been expelled for what is thought to be “gross manifestation of human indiscipline” and replaced by Mr. Imran Sillah. 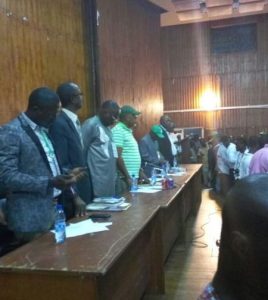 With these sweeping expulsions at the top of the SLPP echelon, comes a wave of suspensions too, pending further investigations.

Tonight’s purging of the SLPP party’s top hierarchy comes as rank and file members call for the enforcement of party discipline, order and  the rule of law – based on the party’s constitution.

But as the drama continues tonight, there is defiance. The expelled national secretary general – Alie Badara Kamara has issued this statement in defiance of the decision of the NEC to expel and suspend twelve of its executives including himself, denouncing the constitutionality of today’s meeting:

“The National Secretariat of the SLPP wishes to inform the general membership of the party and the public at large that the decisions/expulsions emanating from the illegal and fake NEC meeting summoned by the suspended Chairman and Leader, former Chief Somanoh Kapen III has no effect and therefore a mere exercise in futility. 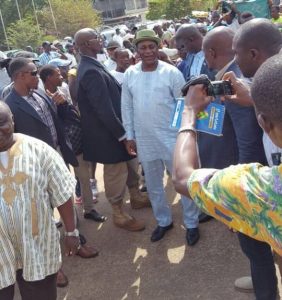 “The Secretariat is encouraging everybody to stay calm and focused, while the legitimate National Officers/Executive headed by Dr. Prince Alex Harding remain fully in charge of the operations, assets and fortunes of the party.

“We further assure you that we shall continue to chat the way forward on abated for the success of the party.

“We are weighing all options to come out with a robust response to this nefarious, lawless and dangerous anti-party activities. Signed: Ambassador Alie Badara Kamara, National Secretary General, SLPP.”

But this show of defiance is unlikely to cut ice with the re-invigorated wing of the party that is only interested in seeing that peace, order and stability return to a fractured party.

If anything, it will only serve to strengthen the resolve of the silent majority of rank and file members, who do not support the chaos and anarchy that have been engineered by a few bad politicians for their own selfish ends.

Tonight’s volcanic eruption at the Miatta Conference Hall in Freetown, will be seen as the single and most decisive catalyst that could strengthen or destroy the party beyond recognition.

As tempers fly and hot molten lava flows from the erupted volcano, senior party veterans will need to think outside the box and fast, in order to prevent the party from disintegrating in the coming days and weeks.

The days ahead will be critical for the survival of the party.

Hence at the NEC meeting tonight, some of the most senior party grandees and parliamentary members were present to witness the proceedings. 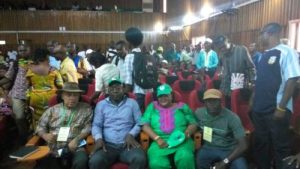 Perhaps the most important observer at the NEC meeting and conspicuous by her presence was the party’s leader in the Houses of Parliament – Dr. Bernadette Lahai.

Dr. Lahai has been strongly opposed to the unceremonious and unconstitutional ousting of party chairman chief Kapen and had publicly called for his reinstatement.

But conspicuous by his absence, was the man thought to have masterminded the chaos and divisions that are threatening the peace, stability and unity of the party – Julius Maada Bio.

Bio is the former military brigadier who in 1992, along with other young soldiers toppled the APC government and was accused of gross violation of human rights, including the execution of more than twenty people.

Bio is also vying for the presidential candidacy of the SLPP, after failing to convince the people of Sierra Leone in 2012 that he has what it takes to rule the country. He was resoundingly defeated at the polls by the incumbent president Ernest Bai Koroma.

But tonight the rank and file members of SLPP will be thinking about the impact this wave of expulsions and suspensions will have on the party in the coming days and weeks.

Is another long drawn court case looming for the SLPP, or will the fallen NEC members go quietly?

Will they form their own party, led by Julius Maada Bio?

What is certain tonight though, is that, as senior SLPP national executives fall on their swords, the balance of power has now shifted to the centre ground, where it is thought common sense and justice will prevail.