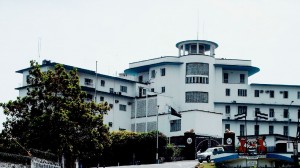 One of my earliest memories as a child was looking forward to Fridays. No, It was not about Friday prayers but about the number of times I was invited to partake in “fankadama charities ( sara). The fun was about one’s dexterity in the art of grabbing (kapu kapu). A Saudi prince, who was erroneously described as “the richest man in the world” recently visited our shores, signed a cheque and left.  All hell breaks loose in his wake; in what has been seen as a battle of egos between Jarrah Kawusu-Konteh (Communication Manager at State House) and Dr. Sylvia O Blyden (Special Executive Assistant). Instead of talking about the petro-dollar donation that was meant for “youth issues and health care”; both worthy causes, we are treated to an ego babbling contest about job descriptions.

Let’s look at how this has been played out. Sylvia is accused of hastily giving an erroneous account of the donation. Notwithstanding the error, the communication manager allegedly asks “who is responsible for putting out the news? The Communications Unit! Was she trying to make us look inefficient with all what we have done for President Koroma even before he became President? Why would anyone want us redundant at the Communications Unit? What is the game plan? Kawusu is reported to have asked the SEA to "come clean and offer an apology to the President and Sierra Leoneans for her deception”

In his final clarification, Kawusu reportedly takes issue with Sylvia for mis-informing the public, and that the “noble Prince Alwaleed Bin Talal Bin Abdulaziz Alsaud said one million dollars to both causes, meaning the youth issue and health care. There is no way I was going to report what the great and rich Prince meant to say. Would I???? That's not how it's done and in the process loads of shame is now on us for just ONE MILLION DOLLARS.” SEA come out clean and offer your unreserved apology to His Excellency the President, people of this country for deceiving them as well as to the Communications Unit at State House.

True to form, the rumour mill has been on overdrive; that Sylvia Blyden is to resign her post as Special Assistant Executive. Not to be outdone, Sylvia retorts with her usual “come back kid “ approach, laced with her” usual humility” that “The SPECIAL EXECUTIVE ASSISTANT (SEA) to the best leader Sierra Leone has ever had, is happy to announce that contrary to the perceptions elicited by my "Gideon Tests" update this morning, I am not resigning from my job as the SEA.”  Those of you staying in China, I look forward to meeting you when I travel with my boss, President Koroma, this weekend to meet the President of China. We shall be spending several days in China so contact our Embassy there to see what arrangements are being made by our capable Embassy staff, for you to meet the Sierra Leone Presidential delegation.”  Now we know how the President is going to spend the weekend (Facebook); thanks dear.

Now that we know the president’s iternary, lets us attempt to look at the political ramifications of this horse play.  Firstly, these two individuals are working in an environment that is the highest seat of office in the land. There is no doubt that, if the allegation against Sylvia is correct, giving the “wrong information” is not something to be swept under the carpet. It is one of the fewest places where “lapsus lingua” is not a virtue. Nevertheless, you would expect that such an unfortunate situation could have been handled better. The fact that these two political gladiators chose face book (Open Forum for Economic and Social Development in Sierra Leone) as their amphitheatre to display their muscles is in effect, demeaning to the office both occupy. Reading through their individual versions and retorts, you could be excused to conclude that it was a “contest for fans”

The appointment of Dr. Sylvia O. Blyden comes with presidential blessings, but the question many are asking following this fall out is whether the package comes with a remit. I am sure it does. There have been some rumblings in some media circles about perceived threats to “jail journalists”, courtesy of the 1965 Public Order Act. Some have even accused Sylvia of having her finger prints all over that; which many regard as a way of silencing her “rivals”. But again, there needs to be a dichotomy between Dr. Sylvia the journalist and Dr. Sylvia the SEA. When that announcement about the donation was made, which hat was she wearing, SEA or the journalist’s?

This is not an attempt to verify who was right or wrong. My concern is that, why individuals holding such high offices should choose to wash their dirty linen so publicly? Taking advantage of the situation and glazing it with personality attacks is even worse. But when it is reduced to a point that much of the discourse is via the social media, then it is an all time low. It becomes even doubly difficult when the pot calls the kettle black. Words like “overzealous”  “It's not where you just talk like you're learning to talk”, have been used for similar effect. We know that every relationship is just so tenuous and precarious, but an injured friend can be the bitterest of foes.

But what’s laughable about it all, is the degree of grovelling that has followed the fall out. Phrases like “this great and transformative leader”, “the great and rich Prince…..” etc.We know people working close to Presidents, Prime Ministers, Royalty, Emperors Etc, have a very delicate job to do. Everything they say or do is a subject for the microscope. They are expected to be honest, accurate and to act with integrity. But just like any relationship, the more contained the environment, the more the good stuff appears and the more the bad stuff will reveal itself.
As politicians, they are expected to be everything to every man.

Facebook is one of the best things since slice bread; according to some people’s estimation. For politicians and people of public standing, it can bring them up close with the public; if “used wisely”. Celebrities use it to promote their fan base, their music etc, while others do so for various reasons. One thing is common though; it promotes mass communication and participation. The social media has been very influential in generating interest in Sierra Leone’s politics; especially among the youth, who had hitherto been apathetic about it. In the past, politics was the domain for the aged. Today, politics in Sierra Leone has been energized youth participation. But again, there certain things that don’t require Facebook for a resolution; and this might just be one of them.

Don’t forget to turn the lights off when you leave the press conference.