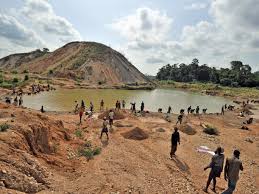 In 2003, Octéa, formerly Koidu Holdings S.A, won the right to explore what is the present day Tonguma Limited concession in the Lower Bambara Chiefdom in the Kenema District. After four years of exploration work, which was punctuated by intermittent altercations with the host community, the Company eventually applied for and was granted a mining license, which gave birth to a Mining Lease Agreement (MLA).

Lower Bambara stakeholders, eager to see development come to their chiefdom and district, supported its bid to secure a mining license, and thus received, with unbridled excitement, the ratification of the MLA. Their optimism was largely stoked by the terms of the MLA, which, unlike previous agreements, made provision for community development.

Four years on, there is still no mine. It was after all a false dawn.  The Company simply hoodwinked the Lower Bambara stakeholders as well as government into believing that they were going to build a mine in Tongo within months of acquiring the mining license. In the end, it is just a dormant asset in the Octéa portfolio, which also includes Koidu Limited and Boroma Limited, that adds to its value. After much protestation from the host community, the Ministry of Mines and Mineral Resources has finally decided to act, albeit belatedly-it has issued the Company with a cancellation notice, and is now locked in prolonged discussions with its leadership. Only time will tell what the outcome of those discussions is going to be. Whatever it turns out to be, lets hope it’s for the best.

As the people of Lower Bambara are beginning to come to terms with this disappointing episode, Stellar Diamonds, a company that operates an exploration license just a stone’s throw away from Octéa’s (Tonguma), has announced that it is on the cusp of acquiring a mining license. This development, coming at a time when Octéa has flattered to deceive, and when the mining industry globally seems to be gasping for air, provides some measure of consolation and optimism for both the people of Lower Bambara and government. The hope is that, they, unlike Octéa, will deliver-develop a mine, create jobs and unlock the value of the concession for the benefit of all stakeholders over the long term.

That said, it is important that the optimism aroused by Stellar’s announcement is tempered with the knowledge that Stellar themselves do not have such a stellar reputation in the country. For years, they held quite an expansive kimberlite concession in Koidu, in the Kono District without really getting it off the ground. In the end, the Ministry of Mines and Mineral Resources ran out of patience with them and cancelled their exploration license. The license was subsequently issued to another company, which also lost it on similar grounds-non-performance. It has recently been awarded to another company. Stellar, it is believed, reapplied for it, but missed out.

With such a history, it is clear that Stellar is not necessarily the knight in shinning armor that is going to engender a change in fortunes for the Lower Bambara Chiefdom. In fact, the people of Lower Bambara are best advised to be cautiously optimistic and not get carried away. We are however, rooting softly for them to go one better than Octéa and make it second time lucky for the Lower Bambara community and the country for that matter.