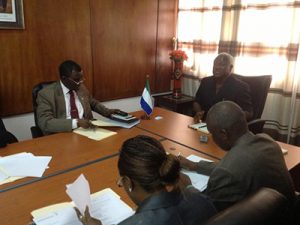 A Task Force established by the Ministry of Health and Sanitation presented its report to President Dr Ernest Bai Koroma on Thursday 15th August at State House, Freetown.

Making a short statement after receiving the report, President Dr Ernest Bai Koroma said that the only thing that gives him hope for the health sector is the fact that the players have changed.

“The players have changed, but the issues are not new. I see new players who have given me hope. Connaught Hospital should be in the forefront in providing medical services in this country. If all efforts have failed in the past, I consider this to be the last ditch attempt to salvage the situation. I hope the implementation of these recommendations will change things for the better”, he said.

The President also noted that the reason why government has not made any headway in transforming Connaught Hospital, despite all the support from multi-lateral institutions to overhaul the hospital, is lack of sincerity. He also recalled that the last time Connaught Hospital was refurbished just before he assumed office as President in 2007, the project collapsed even before the hospital was commissioned.

President Koroma also described the attitude of those who toy with the lives of Sierra Leoneans by giving contracts to people who supply equipment that could not be used because of lack of expertise to operate them as heartless, and having no regard for the lives of the people.

Miatta Kargbo, Minister of Health and Sanitation informed President Koroma that the Task Force was set up in April 2013 to do a thorough study on Connaught Hospital and come up with recommendations on a possible new model of governance and management of the main government hospital in Sierra Leone. She noted that a lot of work is already underway to transform Connaught Hospital into a Centre of Excellence in the entire country.

Delving into the report, Dr Eva Hanciles highlighted the seven (7) areas identified by the Task Force that affected patient care at the hospital. They include unsafe, insecure, worn-out and untidy hospital facilities; high rate of hospital acquired infections; limited range of services; delays in treating emergencies; lack of critical drugs, equipment and consumables; unfair and unclear hospital charges  and fees.

According to Dr Hanciles, the Task Force found there were a common set of eleven (11) causes for the foregoing seven concerns: namely; poor supervision and disciplining of ward nurses, house officers and other staff; unreliable plumbing and poor hygiene and waste management; weak and poorly supervised administrative staff; inadequate clinical guidelines and audits; shortage of senior and mid-grade staff; poor maintenance and training for use of equipment; unreliable diagnostic tests from labs and radiology and poor identification and procurement of critical supplies.

She further noted that following intense investigation, the Task Force also identified nine (9) reasons why the challenges facing the hospital have not been addressed. “The inability of the hospital to recruit and discipline staff is a major setback”, Dr Eva Hanciles pointed out, and went on to highlight the remaining reasons why the challenges at Connaught Hospital have not been addressed before. Shortage of senior and mid-grade staff; ineffective hospital administrative systems; unclear process for government financing, and delays in payment; lack of technical expertise; lack of specialist training opportunities; unclear responsibility for strategic leadership between hospital staff, the hospital board, FCC and MOHS among others.

The Task Force, therefore, concluded with ten (10) recommendations in order to overhaul the prevailing system at Connaught Hospital and to make it a true model of Excellence in Sierra Leone:

1. Establish independent board;
2. Limit intervention of MOHS in day-to-day running of the hospital;
3. Restructure internal management systems;
4. Appoint a qualified and experienced hospital manager and overhaul the  finance department;
5. Improve coordination of external programmes and increase accountability to hospital management;
6. Change government financing for Connaught Hospital from FCC;
7. Support establishment of in-country postgraduate training, with international training in the interim;
8. Identify external partners to provide on-job training for existing staff;
9. Introduce free emergency drugs and overhaul the OPD to become an Emergency Department; and finally
10. To establish a social welfare department and system for bed management.

Members of the Task Force included representatives of the Ministry of Health and Sanitation, Freetown City Council, Connaught Hospital and other stakeholders. It is worthy to note that oral testimonies were received from staff across the hospital and specifically invited from all heads of units.