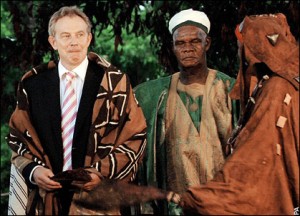 That agenda is fast becoming the subject of serious reflection and debate, as countries such as Sierra Leone, where Tony Blair has invested huge political and personal capital, continue to languish in abject poverty. Corruption and impunity – stifling progress in human development.

Are the wheels falling off the wagon?

Our practical support helps leaders to bridge the gap between their vision for a better future and their government’s ability to achieve it. We do this by strengthening the government’s capacity to deliver programmes that will change ordinary people’s lives for the better, from public services and rural development to infrastructure and job creation” – says the AGI.

But a Civil Society Group – ‘Concerned for Sierra Leone’, based in Freetown, last week wrote an open letter to Tony Blair. They are urging him not to become a part of Sierra Leone’s myriad of problems.

This is what they say:

In recent months Sierra Leoneans and the international community have been concerned about allegations of over USD $1 Million of donor funds from a GAVI grant to Sierra Leone, intended for the vaccination of vulnerable children, remain unaccounted for.

At precisely the same time as corrupt officials in the Government of Sierra Leone’s Ministry of Health and Sanitation were busy siphoning donor funds, just down the corridor in the very same ministry, officials from Tony Blair’s Africa Governance Initiative (AGI) were putting the finishing touches to a path-breaking initiative to provide free healthcare to children under five and lactating mothers.

The people of Sierra Leone have a deep affection for Tony Blair, who as British Prime Minister, played a pivotal role in ending the brutal and bloody civil war that brought the country to its knees a decade ago.

However, the irony of the Africa Governance Initiative plugging one governance hole, while others in the same ministry were busy undermining governance is not lost on us as Sierra Leoneans.

We believe this scandal raises important and urgent questions for the AGI to consider, if it is to leave a lasting legacy of strengthened governance in Sierra Leone – befitting a statesman of Tony Blair’s international stature.

We Sierra Leoneans are becoming more and more worried that donors such as DFID, NGOs and companies, are increasingly ignoring corruption or write it off as “the cost of doing business in Africa”.

Some of us would actually like our countries to function and to make progress; and for embezzlers and fraudsters to be held to account.

The $1 Million embezzled from the GAVI funds is just the tip of the iceberg (see 2011 Auditor General’s report). More than 64 Billion Leones of the total 110 Billion cannot be accounted for by the Ministry of Health and Sanitation!

In other words, if AGI is unable to act in concert with other international partners to strengthen standards of governance in Sierra Leone, there is a very real risk that many of the programmes for which the agency raises funds to implement in the country may simply fail.

We can no longer afford to condone a lax attitude and failure of accountability by international partners that fuel and perpetuate bad governance, thus rewarding the corrupt officials who enjoy virtual impunity.

With sincere thanks and appreciation,

‘Concerned for Sierra Leone’ is an independent growing group in and outside the country, representing people from all social, ethnic, political and religious background. The group is  raising awareness and mobilizing for more open, accountable and just society and political system in Sierra Leone.