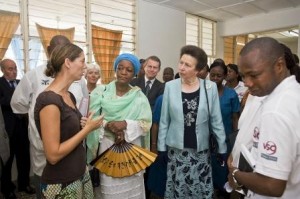 Just after lunchtime on Wednesday a small crowd gathered at Lungi to bid a fond farewell to Her Royal Highness The Princess Royal at the finale of an historic royal visit to Sierra Leone. Her Royal Highness, accompanied by her husband Vice Admiral Sir Timothy Laurence, had spent the past two days in Freetown to mark the 50th anniversary of independence and recalling the visit of Her Majesty the Queen back in 1961.  (Photo: HRH Princess Anne meets staff at PCMH)

Arriving late on Sunday night, the Royal couple’s first taste of Sierra Leone was crossing the bay from Mahera to Freetown, a truly unique airport arrival experience. They awoke the following morning to the bustling sights and sounds of Wilberforce and then wound down Hill Cot Road for a call on His Excellency President Ernest Bai Koroma. During their meeting, the Princess and President discussed the depth and breadth of the historical links shared between Sierra Leone and the United Kingdom and enjoyed a lively conversation about the strength of the 21st century relationship. This built on a similar conversation during the recent visit of Henry Bellingham MP, the UK’s Minister for Africa.

Keen to experience more of Sierra Leone and to meet its people, the Princess undertook a busy schedule of visits throughout the peninsula. Talking with businessmen and women she learned that British and Sierra Leonean companies are working well together across a range sectors, nearly doubling trade between the two countries during 2010. This dynamic partnership will contribute so much to the prosperity of both countries.

The Royal Family strongly supports development and human rights work around the globe and the Princess is no exception. She was keen to use her first visit to the Sierra Leone to see for herself the progress made in health, education and equality since the war. Staff at the Princess Christian Maternity Hospital (PCMH) described for her the significant role that the UK’s development assistance continues to play in helping to build Sierra Leone’s future; especially through the Free Health Care Initiative. The Save the Children Fund showed her their work with vulnerable groups at Kroo Bay. The Princess is President of SCF’s UK chapter and was pleased to feel a personal connection to the ongoing work of British aid organisations and volunteers in Sierra Leone.

The Princess rounded off her stay in ‘Sweet Salone’ by taking the time to explore her diverse culture, environment and history, visiting Bunce Island and spending an enjoyable afternoon amongst the wildlife at the Tacugama Chimpanzee Sanctuary. Both of which highlight the potential for a vibrant tourism trade in Sierra Leone; bringing further investment, jobs and development.

The British High Commission was keen to document this visit and proposes to share it with as many people as possible. We will be putting more information, including many photographs, onto the High Commission website, flickr and Facebook pages. If you are interested in finding out more about the visit or were lucky enough to have been at the events please check theses out, you may even be in one of the photos!