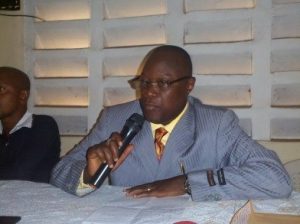 The nation woke up to the “news” that journalist; Dr. David Tam Mbayoh of “Monologue” fame has joined the APC as Party Publicity Secretary of Kono District. Social media was saved from a meltdown; just. You get a feeling that it has been one of disappointment, anger, a sense of betrayal and utter disgust. But that depends on who you talk to. There are others who think that it was a wise move .But why do people feel outraged by his decision? Like anybody else, he is a citizen with equal rights to make independent decisions about his life. Like anyone else, he has the right to go political, align with any political party, support any political party, and if he wishes, contest any election under the banner of any of the legal parties in the country. But unlike anybody else, living a public life sometimes has its drawbacks.  Unfortunately, the public can sometimes assume that is a shareholder of your life. If you are in the public eye, irrespective of what you do, credibility is important. But even if you have a public life, you still have the right to a private life. So what’s the beef with Tam Mbayoh’s decision?

Tam Mbayoh gave a summary of the reasons, motivation and his hopes for joining the ruling APC party. In general, he stated that he was answering the call of his people. He also said that his decision was based on the hope of the welfare of his people and commitment to the country; in pursuit of “peace, security, financial, and development and growth”. He also indicated that he did not come to that decision lightly; that he had done so in “cognisance of his consultant arrangements with his people”. Furthermore, he stated that he had met and discussed with his people. He explained that his decision to listen to his people was a matter of reality. You may want to pay some attention to the word “reality”, for later. Tam Mbayoh acknowledged the role he has played in advocating “for your rights, and welfare, without any disparity and indifference”. He showed that he was naïve not about the tasks ahead, but that he has realised that in his previously self-anointed role as the mouthpiece of the people, “the equation must be national”. This is not in any way a full account of what was broadcast. However, I thought that these snippets would give us an idea of the message he tried to put across, and I apologise in advance if any unintended misrepresentation has occurred here. I still owe my solicitors some money for the last libel case.

It goes without saying that his decision has generated diverse opinions across the nation and even beyond. In the blue corner, some have gone as far as calling him a traitor, a sell-out, a coward, betrayer and opportunist. Of course these descriptions are subject to the political prism at play. Suffice it to say that some have been less complimentary. But why are people so hung up about one man’s decision to change course. Here lies the secret.

Tam Mbayoh became popular with his Monologue programme on the radio. He was seen as the barometer of society and the thermometer of public opinion. He became more prominent by the conspicuous absence of the SLPP which, as an opposition party had become politically jaundiced.  His radio programme was a “must listen” weekly sermon to many people. He was regarded as the voice of the voiceless and down trodden, and much of that bothered on the controversial and hot topics he chose to discuss with the public. Like a self-appointed FIFA referee, who whistled for the political and social off sides, penalties shouts, delaying tactics and foul play by our political parties, Tam Mbayoh engaged the public in the “big conversation”.  He touched on everything, from social, economic, cultural, and right down to the mundane.

With this backdrop, many would understandably feel let down by their champion. Let us flip the coin and see what’s on the other side. Tam Mbayoh professes to be a patriot and by all standards, he displayed this well. Irrespective of our views, others believe that there can be no greater way to show one’s patriotism than serve one’s country in some capacity. This is how he sees it, “that the equation must be national”. We have to recognise that in spite of our varied opinions and stance on the matter, we cannot deny that his crusade, if we can call it that, was to effect change in our society. There are various ways we can effect change in our communities, and being a politician is not the one and only way

But we need to recognise the fact that for change to take place, you need the motivation and the influence to do so. He may have had the motivation as a journalist, but the influence may have been limited. Provided he kept his motivation intact, does joining the mainstream politics put him in a more influential position to effect the changes that he had so ardently promoted and fought for? Does that put him in a position where he can influence policies and the aspirations of the common man for the common good? Are these some of the thinking behind his decision to join the party? Or is it a question of, if you can’t beat them; join them? “Change will not come if we wait for some other person or some other time. We are the ones we’ve been waiting for. We are the change that we seek” (Barack Obama). Is that his thought process?

Tam Mbayoh stands accused of many things today, and the jury is out on this. There are a lot of people who would not be hopeful that he would follow through with his stance, for which many have come to know him. Some people may have drawn their conclusions from their experience with Mohamed Bangura; the erstwhile UDM leader, who later became the Minister of Information and communications. Mohamed came to prominence by virtue of his strong opposition to the government. His stance was so public friendly, that his UDM party was touted in some quarters as the main opposition. Some people may feel different today and this might be one reason why some would not be hopeful about Tam Mbayoh. There are some people who feel that “The greatest patriotism is to tell your country when it is behaving dishonourably, foolishly, and viciously .In politics, there is the latent temptation to tar everyone with the same brush. But Tam may want us to believe that he is his own man, and different. There is no question that his acceptance of the position, as the APC Party Publicity Secretary of Kono District has put his credibility at stake. In the eyes of his opposition, he can redeem himself, if and when he assumes office, people see tangible changes in line with his vision and professed aspirations for his community and the country as a whole.  Would he be considered a patriot or traitor then? You don’t have to answer that. There is a difference between a good man and a good citizen. Tam Mbayoh came across to his fans as a good man, but now wants to be a good citizen. “There comes a time when one must take a position that is neither safe, nor politic, nor popular, but he must take it because conscience tells him it is right.”

Barack Obama once said that “We, the People, recognize that we have responsibilities as well as rights; that our destinies are bound together; that a freedom which only asks what’s in it for me, a freedom without a commitment to others, a freedom without love or charity or duty or patriotism, is unworthy of our founding ideals, and those who died in their defense”. Tam Mbayoh may have been appointed during the last throes of Ernest Bai Koroma’s government, meaning that he would not be working in a government with him as head. The APC is about to select its flag bearer for the presidential election. Does Tam Mbayoh have inside knowledge, to conclude that whoever that may be, he is confident that he can work with that individual? Does he share the same aspirations, vision and interest of the people at heart to accept the offer?  A lot of people may find that complimentary for the prospective candidate.  Others will differ.

While some may see him as opportunistic, others will consider him optimistic, and Optimism is the faith that leads to achievement. Nothing can be done without hope and confidence. That sounds like the kind of message he would like to send to his fans and detractors alike. He may have waited for it to happen, but perhaps he thinks that this is the time to make it happen. Is he a disciple of “Ask not what your country can do for you, ask what you can do for your country?” Some men change their party for the sake of their principles; others their principles for the sake of their party. In spite of our differences in opinion, we all expect the ruling and opposition parties to work together for the future of our country. Does Tam Mbayoh’s move to the APC suggest that the party has an eye for talent or harvesting opposition?” Because it is not opposition but indifference which separates men; and as we know, the hand of opposition is never exposed. Strong people are made by opposition, and Mr Mbayoh will need every ounce of perseverance to hold his course over time, in the face of opposition. Many hope that he will say in power what he said in “opposition”. If he can bring all his experience, aspirations, hopes and commitment to the table, there would be very few who would envy him for this decision.

Faced with the choice to join or not to join, what would you have done? Be honest. Just be honest.