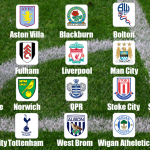 Now that the euphoria, the excitement and exhilaration of the English Premier League has died down, except if you live in the blue half of Manchester, it’s time to take the scalpel to what proved to be the most dramatic climax of the  season. With the EPL celebrating its 20th. Anniversary, it was only proper that the final day of the season turned out to be one of the most exciting moments in its history; and it was fitting that the league lived up to its billing as one of, if not the most exciting leagues in the world. And it is no wonder that it is the most widely watched league in the world.

Ardent fans of all persuasions will remember that the 2011-2012 league seasons has been punctuated with everything and anything ranging from the Tevez and Suarez show, right down to the incorrigible but talented Balotelli antics. As if not to be left out, the referees and other officials also played their part in making the news on the back pages. It will be difficult to dissect the league as a whole in this piece, but let us attempt to do a scalpel job on some of the issues that made it to the annals of the league’s history.

Let me hasten to congratulate Manchester City for winning the title for the first time after 44 years of trying. Most neutral fans will agree that on the balance of play throughout the season, Manchester City deserved the title. It is unquestionable that the team is overloaded with “world class” stars but it is also undeniable that there is still a lot to do to get the team ethic of the squad. Balotelli and Carlos Tevez have done their best to show how not to be a team player. In the case of Balotelli, he can be forgiven for his naivety on the basis of his age, coming to a new environment and the added trauma of a mixed personality and identity crisis. As for Carlos Tevez, it was ironical to see him parade the cup and most controversially, a banner that read “RIP Fergie” when City celebrated their hard earned title.

This was the same Tevez who sunbathed and played golf in Argentina while his fellow pros struggled to keep their body temperatures normal during those dark soggy nights on marshland football pitches. While he put his feet up, the Toure brothers were busy playing their football in two continents with different climates in one season. Carlos went as far as proclaiming that he will never play for the club or manager again, and that he never liked Manchester in the first place; because “it was always raining and there were only two places to eat in town”. This was the ultimate betrayal, when you consider that the adoring fans had paraded a city wide advert “welcome to Manchester”, much to the anger of their rival when Carlos crossed the Rubicon to join Man City two years ago. He was nowhere to be seen when the title seeds were sown, but he was the cheerleader for the title harvest; like the outsider who weeps more than the bereaved.

Manchini’s handling of the whole situation can not go unnoticed. He did his best in a seemingly volatile situation, but when he declared that Carlos was never going to play for the club again, only to restore him to the team with glowing and sometimes grovelling excuses, his man management style was questioned by many pundits. Many City fans won’t care a jot as long as “the end justified the means”. While others saw it as a moment of desperation, others looked at it favourably as a matter of expedience. The story would have been different had they not won the title, and I know who would have shouldered the blame. Now we know why Manchini was near psychotic on the touchline on that day; the enormity of not winning the title was too caustic to contemplate. Lest we forget, Manchini came out with flying colours on the battle of mind games. We have seen how Sir Alex Fergusson had won matches even before a ball was kicked; courtesy of his mind games. We can still remember the Kevin Keegan and Rafa Benitez rants on TV when Alex got under their skins.

Unlike previous managers, Manchini assumed the role of the underdog the moment Man City surrendered their seemingly insurmountable lead in the table. He pre-maturely held out the white flag when they lost away to Arsenal, and many saw this as a game changer. The tactics proved to be a master stroke in that it took away the pressure from his players and lulled Man United into a sleeping chamber of complacency; believing that all they needed to do was turn up for games and the title was theirs. It was not surprising that Manchester Untied slept walked themselves out of victory and into the jaws of losing by the end of their season. Many will say that they got their just desserts, if not for anything but their sheer arrogance.

The drama for the title was not the only story of this dramatic season. Some Arsenal fans would appear satisfied with qualifying for a Champions League spot, after they were given a run for their money by their arch rivals Tottenham and to some extent, Chelsea and Newcastle United. Against the backdrop of a very dismal start to the season, Arsenal fans could be forgiven if they celebrate reaching the Holy Grail that has now become the Champions’ League. But with a 60 seater stadium, a worldwide fan base, the history and a style of football to die for, a spot in the Champions League as an ultimate aim, could be considered delusional and a backward step for Arsenal. It is an open secret that with their financial muscle, Man City have systematically but surgically dismantled the core of the Arsenal squad; with Adebayo, Nasri, Kolo Toure and Gael Clichy all heading to rainy Manchester.

Although most of these players gave us their desire “for trophies” as the main reasons behind their change of employers, (we know the true reasons), and with Man City winning the league, it is becoming increasingly difficult to discredit their “official “reasons. With Van Persie becoming another transfer target for City, it is difficult to negate the tag of Arsenal becoming a feeder club. Arsenal is always linked with the possible transfer of every world class player before the season starts. Sadly, it is Arsenal that always ends up losing their world class players to bigger and seemingly more ambitious clubs. If Arsenal is to regain their rightful position, if not for anything but their style of play, that trend will need to be arrested.

There was some drama at the foot of the table as well. Blackburn Rovers, Wolverhampton and Bolton Wanderers were all relegated; but unlike the other two, Wolverhampton Wanderers spared their fans from the painful and slow exit from the big time since Christmas. In their infinite wisdom, the board sacked their manager, Mick McCarthy after watching a demolition job at the hands of their sworn enemies West Bromwich Albion. QPR, Aston Villa and Wigan scraped through to fight another day. Newcastle United, Norwich and Swansea City all seemed to have punched beyond their weight by merely surviving the drop. With their newly found confidence, the hope is that these teams don’t collapse under the sheer weight of expectation from their fans, and the second season syndrome.

With Manchester City winning the trophy now, it is not surprising that many pundits are rushing to lay bets on them retaining the title. With an outlay of over 200 million spent on players in one season, it is easy to see why many believe that Manchini’s men will dominate the Premier League for many years to come. Newcastle legend Alan Shearer has warned Manchester United to spend big, if they are to catch Manchester City. You can tell that he has never heard of the saying that “one swallow does not make a season”. The only basis for this assumption is the fact that Manchester City has the financial muscle to outmuscle their rivals in the transfer market. But the records and history don’t tend to support this view. There is no doubt that City have the petro dollars to tempt world class players, but when you consider that it took a last minute goal for them to win their first title only ON GOAL DIFFERENCE, you wonder what would have been the outcome had say, Vidic of Manchester United not been injured.

As a Manchester United fan, it is easy to accuse me of sour grapes, but history and statistics are on my side. When Jose Mourhino, the self anointed and self proclaimed “Special One” took over at Chelsea in 2004, like Manchini he won the title for the first time in 50 years.  He repeated the feat the following year and the armchair pundits wasted no time in nailing the last nail to the coffin of Sir Alex Fergusson’s dominance in the league. What many pundits failed to realise then, was that Jose Mourhino took over at a time when the 1999 winning team at Manchester United was been dismantled for rebuilding work. This period saw the departure of players like Beckham, Rudd Van Nistleroy, Nicky Butt, Dwight Yorke and more recently Roy Keane.

Arsenal had just finished one of their finest moments in the history of football; after finishing the season unbeaten. Mourning’s introduction to the Premier League coincided with the time when Arsenal was considering pensioning off players like Sol Campbell, Llunberg, Jens Lehman, Patrick Viera, Robert Pires and Denis Bergkamp who formed the backbone of that magnificent team. With roubles to spare, Mourhino had first refusal on the world’s best players with Chelsea’s new found wealth. With the rebuilding job complete after a lull of two years, Manchester United wrestled the title from Chelsea and won the title for three seasons in a row; leaving Mourhino to contend with FA and League Cups before he was unceremoniously dismissed in 2009. Some will see this as wishful thinking to assume that Man City, like Chelsea will be stopped in their tracks. But if the if history and the manner of City’s title triumph by the slightest of margins is anything to go by, I wouldn’t bet against another team winning the title next season. With the end of a dramatic season, the end of a nerve jangling and nail biting finale, we can now go back to our manicurists to restore our sore fingernails. Lest we forget, there is the small matter of the European Championship and the Olympic games. You just wonder whether fans would not suffer from sports constipation. Stay tuned as we try and figure out why Saudi Arabia is allowed to run rings around the Olympic events.

Don’t forget to turn the lights off before you leave the pitch.