The dust or better still, the mud has not concretised yet but, but questions as to the cause/s of the recent flood and mudslides that claimed the lives of hundreds of Sierra Leoneans are well underway. It is difficult to quantify or attempt to come to terms with the devastation that was unleashed on the unsuspecting victims of that fateful August day. But as the nation grapples with recovering from shocks of such a tragedy, many have been left scratching their heads for answers; if for nothing else but to help provide some solace to all those affected. It is quite obvious that when a nation is gripped by such an enormous cycle of mourning, the natural process of anger, shock, criticism and acceptance (with time) come into play here. It was not surprising that the shock and anger displayed were inextricably laced with lots of finger pointing as to “who to blame?” Amidst the orgy of the blame game, it is unquestionable that the tragedy that befell our nation was just a matter of time. As some will say, the writing was on the wall, although those with a more spiritual persuasion will say that it was written in our stars. This did not stop a collection of “joseph the dreamers”, popping up and professing that they had dreams about such a tragedy was going to happen. Some even went to extreme lengths that they had even asked the government for national prayers but that their calls were not heeded. Others will beg to differ and say that the fault is not in our stars but ourselves; for we had fled to brutish beasts.

Those that have a persuasion for environmental and geological studies would attest to the fact that there have been a lot of warnings about this tragedy. Sometimes, and in times like these, one of the first casualties of tragedies is the truth, and the first accused in this case is “GLOBAL WARMING”. There is no question that as the name implies; global warming is the greatest single threat to man’s existence on this planet; except if you are Donald Trump. Politicians would like to give that first price to terrorism, but I beg to differ. Sierra Leone may be of an irrelevant statistic when identifying the biggest polluters. Irrespective of who does what, there is one common denominator in the global warming conundrum; MANKIND. Global warming is man-made, and any attempt to attribute last week’s tragedy to the effects of global warming cannot be devoid of our role as a species in the chain reaction.

Amid the plethora of blame for our tragedy, the government has been the chief culprit. Some will see it as preposterous to lay the whole blame, and nothing but the whole blame at the feet of the government. But equally, the current government cannot claim monopoly of this blame, as it has been the collective failure of successive governments over time. In blaming the government, we should not be blind to the reckless and irresponsible land grabbing of individuals either. It is painful in this current context, to admit that individuals should also take personal responsibility for this tragedy. The precarious and dangerous nature of these lands could not be overemphasised. There are numerous accounts of stories that government officials had warned, evicted people and in extreme circumstances demolished houses that were either deemed illegal or badly situated. Sadly, such exercises had not only been few and far between, but selective. Successive governments have not been even handed in going about their business of protecting the land or otherwise..

It is true that the ordinary citizens have all contributed at various levels and degrees to the situation. Over the years, the land had been systematically disrobed, slashed and burnt for buildings, firewood, charcoal, quarries, you name it, and it’s been there. Some people’s buildings were legally built with environmental friendship in mind. Sadly, these were not spared either in the mudslides. As citizens, the expectation will be that we are aware of the precarious and disaster prone nature of these areas. Because of “overpopulation”, some people had “no option” but to settle in these areas, irrespective of the perceived and expressed risks”, cannot be used as an excuse; though understandable. It may sound cruel to some, but we cannot hide from our personal responsibilities, as a people that contributed to this tragedy; hence culpable.

Notwithstanding personal responsibilities, the bulk of the failures and responsibility should lie squarely on the shoulders of successive governments, but more so on that of the current government. And the government has broad shoulders enough to carry them. It is not surprising that since the tragedy, the government has taken the brunt of people’s anger, criticism and blame. Even some of us could not escape their wrath on social media, for advising that it was time to bury our dead, support the victims and pray for our country instead of engaging in the blame roulette. But there is no doubt that the government largely and justifiably carries the can for this tragedy.

The oldest and simplest justification for governments is as protector: protecting citizens from violence. All parliaments worldwide perform three core functions: to represent citizens interests, to pass laws and to monitor the actions of the government. In addition to performing a legislative function, governments have the power to introduce legislation on their own, the power to amend, and the power to approve or reject their laws. This is the function that is strongly linked to the representation function; because it is through the will of the people that the parliament receives its authority in democratic countries. We have all seen on display, the horrors of little or no government to provide that function in the world’s many fragile states and essentially ungoverned regions. It was therefore a pathetic attempt of an excuse; to say that our government had evicted people, dismantled houses and warned people about the dangers lying beneath these areas, BUT PEOPLE DEN TRANG YASE. 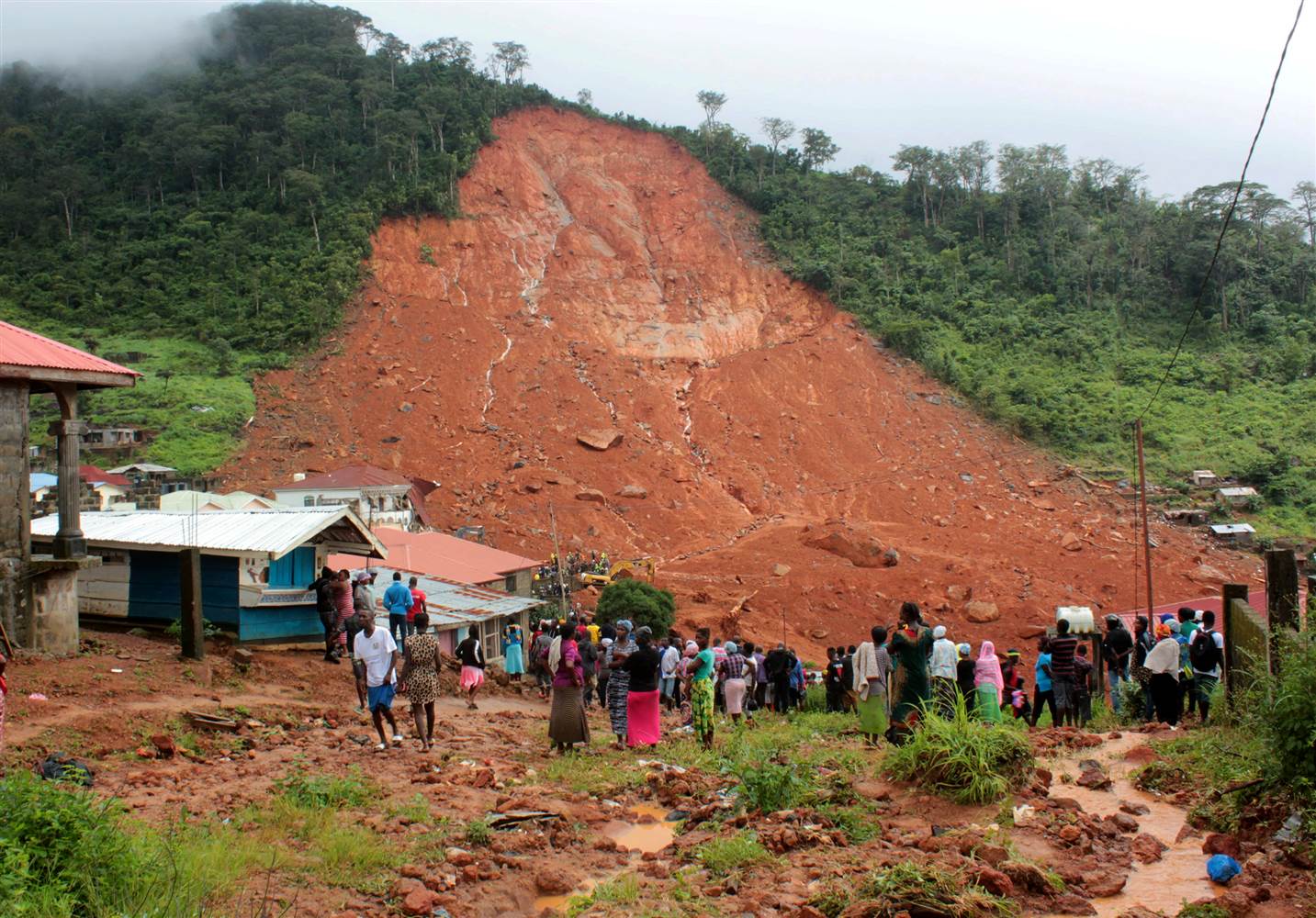 By implication, such an excuse can be seen as an admission of ineptitude to govern. Either by default or by association, governments and especially the ministry of lands has been involved in shady and nefarious deals for land in the country. Our law courts have been clogged with land cases throughout. It is not uncommon to see various parties claiming the same plot of land; with each providing “authentic land deeds” to claim ownership. It is common to see one plot of land sold many times over to different people. Land cases are one of the biggest cash cows for our milking law firms. And if you squeeze further, the warring parties are always ready to provide “authentic” documents apparently signed by government officials from the same lands ministry, as proof of ownership. Even though we have an Environmental Protection Agency, there are stories about officials who have been overruled by big wigs to provide protected and protectable lands to massage their interests. Others have been threatened, attacked and even killed in their line of duty. The kind of recklessness, with which our posterity and heritage have been abused, misused and refused, is common for all to see. But some will want you to believe that DE PEOPLE DEN TRANGA YASE. Of what essence is a government, if it cannot legislate and enforce the law, to protect its citizens?

The shock, dismay and anger have led to many calling for a commission of enquiry to be set up. Unfortunately, the appetite for such an exercise is very low; thanks to the lack of faith in the transparency and truth worthiness of such exercises in our country. We are too familiar with the outcomes of past commissions of enquiries, and many will not hold their breath if one is set up for this. Like I said earlier, it would be irrational to conclude that the current government should solely carry the blame for this tragedy. Like the Chinese say, every crisis should be seen as an opportunity. Most of us saw our president Ernest Bai Koroma, struggling to hold back his tears during the mass burial ceremony. Mr President, you now have the OPPORTUNITY to undo all the ills and wrongs that have been perpetuated by past governments; including yours. There can be no better way to pay tribute to the victims, and to ensure that their deaths did not go unnoticed than to ensure that such a tragedy never happens again or at least is minimised.

This tragedy was a high price to pay, but maybe, and as painful as it is to say, that was what was required to bring us all to our senses. Our president may have presided over one of the worst tragedies to hit our city, but he now has the opportunity to leave us with a lasting legacy for generations unborn. The ministry of lands, Environmental Protection Agency, Headmen, Councillors and all those connected should be reined in for a way forward. If we miss this opportunity of a crisis to sort ourselves out, posterity will never forgive us.

If our history serves me right, these same mountains were supposed to have protected us from marauding slave drivers. Although the area was the choice of habitat for our colonial masters, the mountains have symbolically served as protection even against the likes of Pedro Da Cintra. The “lions” in these mountains have always roared in our defence. But we desecrated the land and the gods became angry with us. We are now left to deal with their wrath, as they rained down their tears on us. And we want to blame the gods? Fanciful I know, but the gods are not to blame.

“At that time my anger will flare up against them; I will forsake them and hide my face from them, so that they will become a prey to be devoured, and many evils and troubles will befall them. At that time they will indeed say, ‘Is it not because our God is not among us that these evils have befallen us?’ [DEUT 31:17]