A people without the knowledge of their past history, origin and culture is like a tree without roots.(Marcus Garvey). It was with a heavy heart that I read about the dilapidating conditions at Fourah Bay College. Fourah Bay College is a public university in the neighborhood of Mount Aureol in Freetown, Sierra Leone. It was founded on February 18, 1827, and it is the oldest university in West Africa. It is a constituent college of the University of Sierra Leone and was formerly affiliated with Durham University (1876-1967). Fourah Bay College soon became a magnet for Krio and other Africans seeking higher education in British West Africa. These included Nigerians, Ghanaians, Ivorians and many more, especially in the fields of theology and education. It was the first western-style university in West Africa.

Under colonialism, Freetown was known as the “Athens of Africa” as homage to the college. Enough of the history lesson, you may say. But it is the history of this bastion of enlightenment that lends credence to its very essence in the first place. How times have changed and how our leaders have demonstrably shown their disregard and contempt for this edifice will defy any sane thinking. Against all odds, it is difficult to comprehend how our leaders have allowed this noble institution to rot to its core foundations. And to think that our heads of state, past and present have all enjoyed the ceremonial accolades of being Chancellors of this University really beggars belief.

It is with serious diplomacy that one would describe the current situation in the university as not only embarrassing, disgraceful but pathetic. Of course, this is not the first time that the college has been embroiled in disgraceful situations. During the era of the one-party statehood of late Siaka Stevens in our country, Fourah Bay College became the ceremonial opposition to the undemocratic rule. Under the leadership of Ali Kabba, who is incidentally aspiring for the highest office in the land, we saw how brute force was used to quell down any hint of such opposition. Since the invention of time, this citadel of learning has lurched from one embarrassment to another. On 11 August 2011, it was reported that University students at Sierra Leone’s respected Fourah Bay College were unable to take their final exams because of a lack of paper (BBC). Many would wonder if this institution could go any lower.

The question that will be on the lips of many well-meaning citizens is how and why our leaders have allowed this institution to degenerate into such a quagmire of despicable proportions. Do these leaders have no regard for education? It is safe to say that many of our leaders never had the opportunity to dampen the walls of this great institution; either by choice or design. But does that give anyone in authority the right to show such despicable disregard for such a very important corner stone of our society? How many of this institution’s past and present students would be proud of it today? Why the blatant disregard for education? Do these people know that education is not a preparation for life; but that education is life itself? Abraham Lincoln once said that “the philosophy of the school room in one generation will be the philosophy of government in the next. It has always been said that the youths of today are our future leaders. If such a cesspit is the best habitat to prepare our future leaders in, what hope is there for our country? As a result of the current malaise, “students now arrive at the university ignorant and cynical about our political heritage, lacking the wherewithal to be either inspired by it or seriously critical of it”. This is a sad state of affairs. This is not what our colonial masters had in mind, when they bestowed on us the enviable accolade of “Athens of Africa”. To all intents and purposes, it is now becoming the ruins of Pompey. 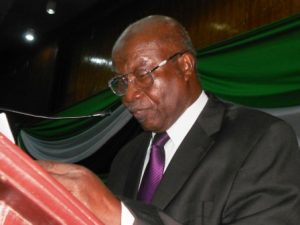 From time immemorial, our leaders seem to have some disdain for our educational system. Instead of it being at the forefront of their policies, the education of our society has always been relegated to the bottom pile. At best, they have not accorded it the attention it rightfully deserves; as if they themselves never went to school. They know the value of education in our society, but they are adept at turning a blind eye to the demands of maintaining our institutions. Why would any government allow such an illustrious institution to go to the dogs is beyond belief. As a nation, there is an unspoken propensity for a low threshold for prosperity. Our children deserve better.

It is an open secret that most of those in power have their children studying in western countries. But does that mean that the ordinary man should be deprived of basic education? As a nation, we should develop a passion for learning. If we do, we will never cease to grow. In the latest 2015 ranking of Africa’s top universities, Sierra Leone does not even get a look in. South Africa has the first top 5, followed by 4 from Egypt. Even poor Burkina Faso comes in at a decent 18th. It is a shameful irony that Sierra Leone, once the pacesetter is ranked 200th in this illustrious list. What a shame; thanks to our so-called leaders. How art the mighty fallen. Judging by the way things are going, it is fair to say that our university is fast becoming an “endangered species”. With that in mind, we should be thinking of applying to UNESCO to consider FBC as a heritage site, so that it can get universal protection from all those bent on running it into extinction. Fourah Bay College is a major part of our heritage. As a nation, our history will never be complete without it. Our leaders should remember that “a people’s relationship to their heritage is the same as the relationship of a child to its mother”. But this general malaise and disdain should be stopped.

Take a look at the original building of the university at the Elizabeth 11 Quay. That shell of a building is steeped in history. Any other country will preserve such a historic monument for generations unborn. But no; it has been left to rot away. Rehabilitating historic buildings and using the infrastructure that is already in place to serve them is the height of fiscal and environmental responsibility. Our leaders should remember that “It is not the honour that they take with them, but the heritage they leave behind.” that matters. After they had gone, posterity will be there to judge them. By implication, the abject lack of attention to such a heritage by our leaders is a statement that we don’t have a history to be proud of; which in itself is risking our identity. Talking about identity, what is the Sierra Leonean identity?

We ask our leaders to remember that “education is the movement from darkness to light.” Please save our heritage for our children unborn. By preserving our past, we are engaging the past in a conversation with the present, over a mutual concern for the future. A concerted effort to preserve our heritage is a vital link to our cultural, educational, aesthetic, inspirational and economic legacies – all of the things that quite literally make us who we are.” (UNESCO). Maintaining one’s culture, values and traditions is beyond price.” We implore our leaders to save this heritage site, if for nothing else but for posterity. Fourah Bay College is part of our heritage to be proud of. We have to preserve it and use it sustainably. And the short-term use of resources at the destruction of the long-term heritage of this country is not a policy that we can pursue.

Don’t forget to turn the lights off before you leave the dormitory.