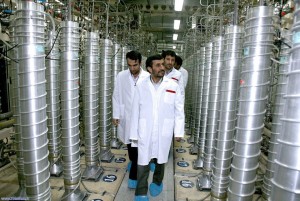 Almost the entire senior hierarchy of Israel's military and security establishment is worried about a premature attack on Iran and apprehensive about the possible repercussions, a former chief of the country's defense forces told newsmen yesterday.
Lt-Gen Amnon Lipkin-Shahak, who is close to Defence Minister Ehud Barak, said there had been little analysis of what happens the "day after" when the Tehran regime and its paramilitary allies retaliate. He warned that an assault may lead to Mahmoud Ahmadinejad benefiting from popular anger against foreign aggression.
General Lipkin-Shahak stressed that Iran with a nuclear arsenal would be a hugely destabilizing factor in the region. But, he said: "It is quite clear that much, if not all, of the IDF [Israeli Defence Forces] leadership does not support military action at this point."
The risks of military action underlined by the highly decorated former commander show the apparent divisions within the establishment over the best way to combat Iran's nuclear programme. The Prime Minister, Benjamin Netanyahu, and Mr Barak are reported to be veering towards military action while fellow ministers as well as the defence and intelligence communities have reservations about this path.
The General's comments follow the public intervention in the Iran debate by a former head of Mossad, Israel's intelligence service. Meir Dagan said that following such a course of action would plunge the region into war with Hezbollah in Lebanon and Hamas in Gaza.
General Lipkin-Shahak stressed he had no idea what decision the security cabinet would reach. He said the current Chief of General Staff (CGS), Lt-Gen Benny Gantz, and Mr Dagan's successor at Mossad, Tamir Pardo, would offer advice. "We have to remember that the CGS and the head of Mossad are there to serve the State of Israel, they are not party political. They will no doubt offer judgment and advice on what is best for Israel," he said. "In the past, the advice of the head of the IDF and the head of Mossad had led to military action being stopped."
Sanctions on Iran imposed by the EU and the US, including an oil embargo, were stronger than many people had expected, said Lt-Gen Lipkin-Shahak. "They are already having some impact on the Iranians on the street, they are worried. They may feel that it is the actions of the [Iranian] government which has created this situation. So one would think it would be worth seeing what impact the sanctions have before taking the next step."
General Lipkin-Shahak said that depending on intelligence does not always work. "Let's not forget that an Israeli soldier, Gilad Shalit, was held for five years just five, six kilometres from our border, and despite doing our best we had not been able to free him, despite the fact we were getting lots of intelligence reports." Israel was forced to obtain the soldier's release by freeing more than 1,000 Hamas detainees.
"Even if there was 100 per cent intelligence, even if the Americans knew the exact locations of the sites, it could be very difficult to hit what is inside. The Iranians are not stupid, we should not underestimate their intelligence."
The General's comments come as Mr Barak begins interviewing candidates for the post of commander of the Air Force, the man who would be in charge of any possible air strike on Iran.
Unusually a difference has reportedly opened up between Mr Netanyahu and General Gantz, with the former promoting his own military adviser, Maj-Gen Yohanan Locker, and the latter favoring the head of the IDF's Planning Directorate, Maj-Gen Amir Eshel. Some observers suggest General Locker would be more inclined to launch a strike on Iran than General Eshel.
Meanwhile, despite calls from the United States of America and the European Commission for a tougher sanction against Iran including oil deal prohibition, many economically prosperous countries in Asia are yet to join the queue.  Iran has officially responded by cutting oil exports to any country in the EU region.
India, which imports 70% of its oil products from Iran, categorically rejected the EU call for oil sanction calling it an eccentric decision reached by the West.  It’s quite clear that China and Russia would definitely repeat what they recently did in the case of Syria should it come to Security Council decision on Iran.
The recent voice from the Pentagon about a possible American/Israeli military strike in Iran sounds softer than expected by many as the Pentagon analysts who had previously warned against Iran’s nuclear programme calling it a bomb-making process in disguise, are again saying that even if Ahmadinejad is trying to make a bomb, but he is several years away from making one.