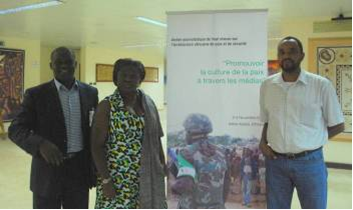 Addis Ababa, Ethiopia –The Journalists’ Network for Peace and Security (NetPeace) was officially launched on 4th November during the High Level Media workshop on the African Peace and Security Architecture(APSA), organized by the Directorate of Information and Communication (DIC) and the Peace and Security Department (DPS) of the African Union in partnership with the Francophone Research Network on Peace Operations (ROP) of the University of Montreal, at the AU headquarters, Addis Ababa, Ethiopia,  from November 2nd to November 4th, under the theme “Promoting a Culture of Peace through the Media”.

The workshop ended with the adoption of a declaration (see below). The sixty participants who came from the 15 Member states of the African Union Peace and Security Council, communication experts and representatives of the AU organs and Regional Economic Communities (RECs) reiterated through this declaration their “collective commitment to work for the entrenchment of a culture of peace in Africa and urge all media to contribute thereto”. While welcoming the creation of NetPeace, they committed to promote the flow of information between the African Union and the media, particularly in the area of peace and security” and to “promote the network’s activities as well as synergies with existing media network for peace and security on the continent”.

This network is composed of journalists specialized on peace and security issues and aims at promoting and entrenching a culture of peace through the daily work of journalists. Through an electoral process, twelve coordinators including a Chair, a Deputy Chair and a Secretary coming from the 5 regions of the continent and the diaspora were elected. Ms Uduak Amimo, media expert from the Eastern region was elected President. Mr Vincent Nkeshimana, Director of Radio Isanganiro in Burundi, and Mr Nicolas Abena, editor-in-chief of I-Magazine, were respectively elected vice-president and secretary of NetPeace.