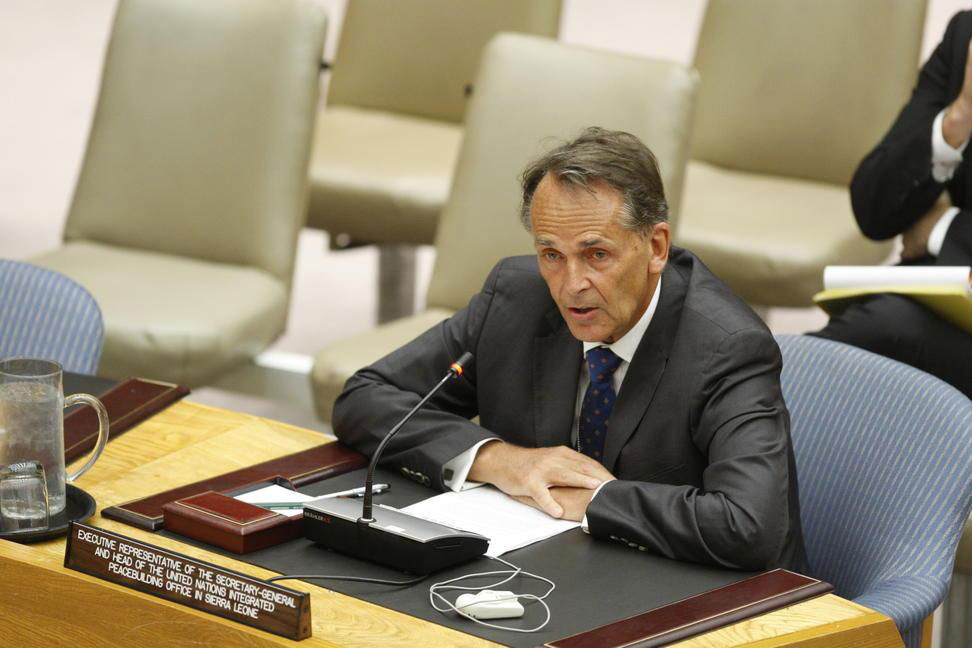 A high-level meeting, bringing together members of the UN Security Council, General Assembly and Peace Building Commission at the UN headquarters in New York on Wednesday condemned persistent attacks by pro-government news outlets against the German born Executive Representative of the Secretary General in Sierra Leone and head of UNIPSIL, Mr. Michael Schulenburg.

The meeting focused on Sierra Leone as it heads towards crucial elections in 2012. The UN hopes that after the elections it would downgrade its mission in Freetown to a country office, a proposal already tabled by Mr. Schulenburg. But that will depend on their free and fair conduct, which alone will guarantee the broad acceptance of the results, the diplomats said.

Canada’s Ambassador and Permanent Representative to the UN, Guillermo Rishchynski, condemned the attacks on Schulenburg as “most uncalled for and unfortunate”, adding that they only “undermine Sierra Leone’s image.” Rishchynski, who, like other delegates at the meeting, expressed confidence in the work of Schulenburg, noted that it is the responsibility of the Sierra Leone government to “create a peaceful and open atmosphere” leading to the elections. He regretted that the attacks on the UN and its key representative send the wrong message about the government’s commitment in that respect. Ambassador Rishchynski said that Schulenburg could not participate in the meeting via video conference because the technological arrangements could not be made in time, but noted that he will be visiting Sierra Leone in January and that Mr. Schulenburg will be attending the next meeting on Sierra Leone.

Also present at the meeting was Sierra Leone’s Permanent Representative to the UN, Shekou Touray, who expressed appreciation for the UN’s role in Sierra Leone and his government’s commitment to conducting free, fair and acceptable elections in 2012. The Nigerian representative pointed out that the attacks on the UN and its representative “shows a gap” in the government’s commitment to the process since the UN is working for a level-playing field. Ambassador Toure said he will pass on the concerns to President Ernest Bai Koroma. The German representative at the meeting condemned the UDM leader, Mohamed Bangura, for making false statements about the UN and its representative, and urged Mr. Toure to distance his government from such provocative attacks.

Also briefing the meeting at the UN HQ in New York was an IMF representative, who noted that the “accelerated spending” of the government on “infrastructural” projects in “anticipation of bonuses from iron ore mining” is a serious problem since government’s revenue from the iron ore exports in 2012 will be minimal. Most of the companies have negotiated low income tax rates, and they are unlikely to report profits, on which royalties can be imposed, in 2012, he said. He anticipates significant expansion of government’s revenue base in 2015.

Sierra Leone was placed on the Peace Building Commission’s agenda on 23 June 2006, following a referral from the Security Council. To date, the PBC has worked with the government and international and local partners to address the country’s peace building priorities in the areas of youth employment and empowerment, justice and security reform, good governance, energy sector development, and capacity building.