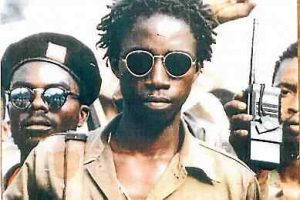 PHILADELPHIA – On 18 October 2017 a jury of 12 in a U.S. Federal Courthouse found former Liberian rebel commander Mohammed Jabbateh, aka “Jungle Jabbah,” guilty of two counts of fraud and two counts of perjury for lying to U.S. government officials about his role as a combatant in the Liberian Civil War. Jabbateh will be sentenced most likely within the next few months. He faces up to 30 years in prison.

In order to prove that Jabbateh provided false information to U.S. immigration authorities and procured asylum in the United States by fraud, the prosecution had to prove that he was a high-ranking rebel commander during the first Liberian civil war and committed criminal actions while in that position. Prior to immigrating to the United States, Jabbateh served as a battalion commander for the rebel group ULIMO (United Liberation Movement of Liberia for Democracy), one of the key warring factions that fought against Charles Taylor’s NPFL (National Patriotic Front of Liberia) during Liberia’s first civil war (1989-1996).

Over the course of two weeks, twenty witnesses travelled from Liberia to Philadelphia to testify in detail about horrific acts committed by Jabbateh and his ULIMO soldiers, including cannibalism, rape, murder, and slavery. Their testimonies exposed the horrors of the civil war, and Jungle Jabbah’s role in perpetuating the violence that destroyed the West African nation. One witness recounted her rape and sexual enslavement by Jabbateh, while another witness described how soldiers under Jabbateh’s command killed her husband and then ordered her to cook his heart. Another witness testified that she saw Jabbateh put a pistol into her pregnant sister’s vagina and pull the trigger. Jabbateh was so infamous for his terrible acts in Liberia, one witness stated, that the people could never forget him and named a bridge after him.

This historic case marks the first time that Liberian victims were able to testify about their experience of the atrocities committed during the first Liberian civil war in a public and fair trial. It was also the first trial of a former commander of the armed group ULIMO. The war resulted in the death of 150,000 civilians and the commission of a wide range of war crimes and human rights abuses by each warring faction in the conflict. To date, no one has been held to account in Liberia, and the trial against Jabbateh is the first confrontation of the crimes committed during the first civil war in a foreign country.

Civitas Maxima (CM) and its Monrovia-based sister organization the Global Justice and Research Project (GJRP), both independent and apolitical NGOs, have collaborated since 2014 with U.S. authorities on the investigation of crimes Jabbateh allegedly committed in Liberia.

“This is the first verdict giving some measure of redress to Liberian victims who have been yearning for justice for too long. This case shows that Liberians do not have to accept the status quo of impunity in Liberia. Victims want justice and we will continue to support them in their pursuit of accountability within and outside of Liberia, independent of any tribal affiliation or political influence. This is only the beginning. As a survivor of this war and advocate for justice, I want to thank the witnesses for their courage, thank the Liberian people for their cooperation and support during the trial and thank the Liberian media for their wide coverage”, said GJRP’s director Hassan Bility in Monrovia.

CM published daily detailed reports of the legal proceedings on its website. CM also supported, through a partnership with New Narratives, three Liberian journalists who provided independent and balanced coverage of the trial from Philadelphia and Monrovia.

Moreover, CM and the GJRP launched a media campaign called “the Liberian Quest for Justice,” which provided a publicly accessible and unbiased account of the proceedings and information related to impunity in Liberia (Facebook and Twitter). The campaign used cartoons of a Liberian girl called Musu to explain the relevance of the case and engaged with Liberians online. Musu and the campaign have helped reach thousands of Liberian survivors in Liberia and the diaspora, ensuring that the impact of this trial reaches the people most affected by Jungle Jabbah’s crimes.

The Liberian Quest for Justice will continue to support Liberian victims in their pursuit of accountability for war time atrocities, and inform the public about other public trials of alleged Liberian war criminals coming up in Europe and the U.S. The Jabbateh trial was only Chapter

The Global Justice and Research Project (GJRP) is a Liberia-based non-profit, non-governmental organization that documents war related crimes in Liberia and, where possible, seeks justice for victims of said crimes, with the full consent of the victims.