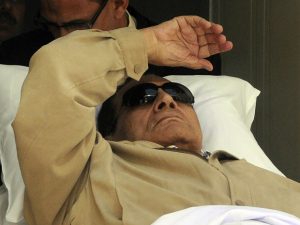 CAIRO — Ousted Egyptian President Hosni Mubarak and his former interior minister, Habib al Adly, were sentenced to life in prison for complicity in the killing of protesters during the 2011 wintertime revolt that turned once-untouchable despots into defendants. The sentence made Mubarak the first autocrat targeted in the Arab Spring revolts to be held to account in a court of law in the country he once ruled. After the verdict was handed down, he was ferried aboard a helicopter to Tora Prison’s military hospital, where Mubarak refused to get off the aircraft, tears in his eyes, according to wire services.

“He was crying and would not get out of the helicopter. Security officials spent some time convincing him to get out,” a security official told Agence France-Presse. “He’s now convinced and will be entering the prison shortly.”  This marks the first time Mubarak enters a prison after being housed at a military hospital since his detention in April 2011.

Despite overwhelming evidence, the three-judge panel that presided over the landmark case acquitted the former president, his two sons and a business tycoon of corruption charges, citing a statute of limitation. The judges also acquitted six senior police officials in the killings of demonstrators due to lack of evidence.

The sentences unleashed mixed reactions. Anti-Mubarak protesters initially rejoiced outside the heavily secured courthouse as firecrackers popped in the background. As the defendants were whisked out of their cage, people inside the courtroom broke into angry chants condemning the acquittals. “The people want the downfall of the judiciary,” some spectators screamed.

The verdict has the potential to jolt Egypt’s presidential runoff race, as a former Mubarak prime minister faces off against the candidate of the Muslim Brotherhood, the Islamist group banned and besieged by the former regime.

Outside the courtroom, thousands of riot police stood guard and a series of armored vehicles lined up to protect the building. Riot police rushed the crowd of largely anti-Mubarak protesters after the verdict was announced, chasing them from the premise of the police academy and across the street.

Mubarak attended the hearing on a stretcher, wearing dark shades. He lay cross-armed, expressionless and motionless inside a black iron cage, as his sons, standing in front of him, sought to shield their 84-year-old father from cameras inside the courtroom.

Before announcing the verdict, presiding judge Ahmed Refaat described the 2011 revolution as a historic turning point for the nation as Egyptians rose up in pursuit of dignity. “As the sun rose on January 25 over Egypt, a new era was ushered in,” Refaat said. “A bright day loomed large for the great people of Egypt with new hope they long yearned for.”

Mubarak and his former minister will almost certainly appeal the convictions, which could be overturned. The prosecution’s failure to secure convictions in the charges filed against the six senior police officers disappointed activists. No one was held accountable for actually killing the nearly 1,000 people during the wintertime revolt. Instead, the conviction of Mubarak and Adly was because they failed to stop the killings, rather than ordered the killings.

Heba Morayef, the Cairo-based researcher for Human Rights Watch, said the outcome “highlighted the really bad job of the prosecution.” She predicted the acquittals will trigger anger, particularly because the head of the country’s infamous riot police was not found guilty. “I don’t think this will satisfy people,” she said. “It’s a reflection of the fact that this was a very badly investigated case. It should have never gone to trial if they didn’t have enough evidence.