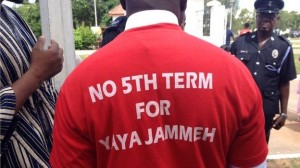 A plan to restrict West African presidents to two terms in office has been dropped for the time-being by heads of state.

They discussed the proposal to impose limits at a regional summit. Togo and The Gambia, both with presidents who have been in power for more than two terms, opposed the idea, diplomats say.

The third-term issue has caused a lot of controversy in several African states in recent years.

Burkina Faso's President Blaise Compaore was forced out of office last year after trying to change the constitution so he could run for a third term.

In East Africa, there have been weeks of protests and a failed coup after Burundi's President Pierre Nkurunziza announced plans to seek a third term in office.

The constitutions of most West African states already impose a two-term limit.

The proposal discussed at Tuesday's summit of the regional body Ecowas in the Ghanaian capital, Accra, was supposed to formalise this across the region. 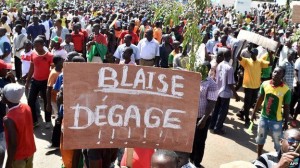 If a popular referendum on presidential term limits was held across the region, there is little doubt that people would vote in favour of it.

Since the president of Burkina Faso was overthrown last year for trying to change the constitution so he could seek re-election, this has become a big regional issue.

However, some West African leaders argue that each country has a different political context and there cannot be a blanket ruling.

Optimistic souls would say that it is already a step forward that presidential terms are being discussed at an Ecowas summit.

But imposing a two-term limit limit requires unanimity among West African leaders, and there is still a long way to go to achieve that.

The UN representative in West Africa Mohammed Ibn Chambas backed the plan and said it had been triggered by the failed attempt by President Compaore to change the constitution to allow him to run for a third term.

But the BBC's Sammy Darko in Accra says that it was not adopted as Togo and The Gambia had reservations.

"This dissenting view became the majority view at the end of the day," the Reuters news agency quotes Ghana's Foreign Minister Hanna Tetteh as saying.

The plan has now been deferred for further consultation.

Togo's President Faure Gnassingbe has been in power since 2005 and won a third term in office last month.

Gambian President Yahya Jammeh is reaching the end of his fourth term in office after coming to power in a coup in 1994.

President Jammeh told the BBC in 2011 that presidents should be judged on what they do in power not by the length of time they have been in office.

"I will deliver to the Gambian people and if I have to rule this country for one billion years, I will, if Allah says so," he said.