It is no secret that Africa is set to become the next global battle ground for western commercial interests.  Many people have translated this new economic genre that is about to be unleashed on Africa as the second Scramble for Africa. Interestingly, there are those who would see this as the new dawn for Africa’s development from the doldrums of retrogression. There is no doubt about Africa’s potential. There is no doubt about Africa’s vast resources. What have always been in doubt are Africa and African leaders’ ability and capability to utilise the continent’s vast resources and potential to its fullest, and for the benefit of the perennially suffering masses.  Another thing that has never been in doubt is African leaders’ penchant to become kleptomaniacs; once they attain the highest seats in the lands.  But any attempt to diagnose these terminal illnesses that seem to afflict African nations will possibly remain futile. Nevertheless, we can safely say that corruption, the lack of or absence of rule of law and accountability rank high on the diagnosis chart. If we are to symbolise the continent’s problem today, it is like a patient that is admitted to one of the best hospitals with all the medical faculties that money can buy. Yet still, the patient cannot even access simple antibiotics for a common cold.

Like I have always said, Africa and its nations have become the proverbial man that is sitting by the banks of the river and washing his hands with spittle. We have water everywhere, but not a drop to drink.  It is therefore not surprising that our continent has always relied on foreign intervention to wake us up to our potential. We have had to rely on “outsiders” to tell us how rich we are. This is like trying to sell ice to Eskimos. Sadly, this has always been, and will continue to be the state of affairs; until African countries are led by leaders who have the interests of their people at heart. Unfortunately, the list of those with such hearts for their people is minuscule. Even when Africa unearths such gems, the West ensures that their “negritude” approach is cut short in their prime; because it is to the disadvantage of Western commercial and economic palates for Africa to be independent in the truest sense of the word. Take for example leaders like Thomas Sankara, Kwame Nkrumah, Patrice Lumumba, Samora Mitchel, Sheku Toure and many others. 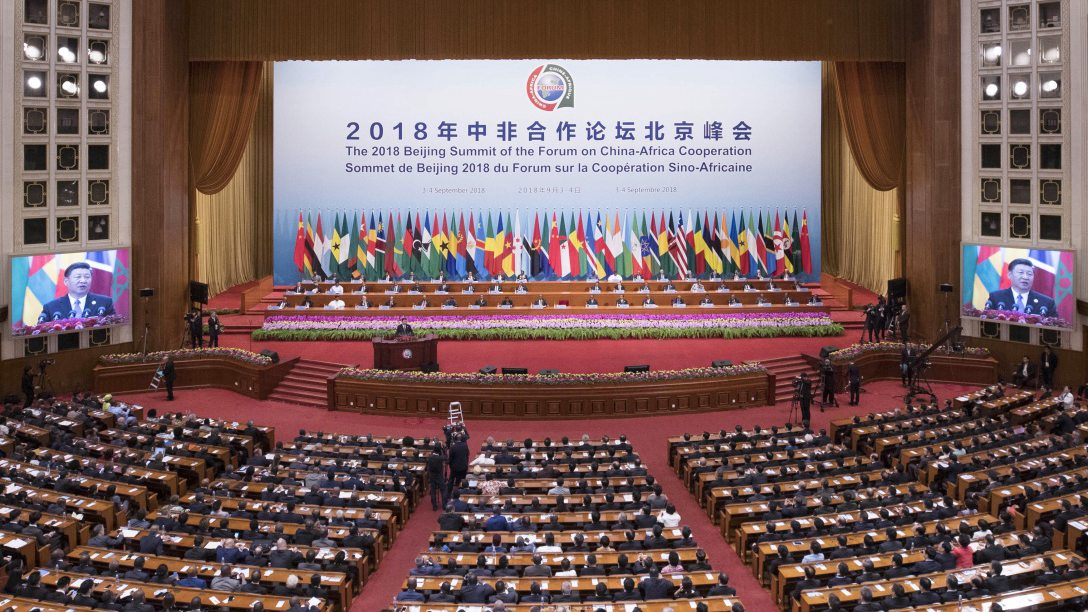 But unlike the first Scramble for Africa which was the sole domain of European countries, China has been and appears to be central to this new wave. China has successfully rooted its economic success and survival firmly in the entrails of the African continent. So what is different in this second Scramble for Africa? Without the obvious fact that China is now on board, we know that this new wave was not triggered by the love the European countries have for Africa, but as a stress reaction to the economic climate that is blowing across and within their own domestic corridors. It is no secret that the British Prime Minister, Theresa May’s whirlwind tour of some African countries was precipitated by the fallout  from Brexit, should Britain fail to get a deal. As if to make a point, China went on a charm offensive during the recent China-Africa summit in Beijing on Monday.

But let us compare them here. While Theresa May called for the “UK to become the leading G7 investor in Africa by 2020”, and expressed her determination “to work side by side with Nigeria to help fight terrorism, reduce conflict and lay the foundations for the future stability and prosperity that will benefit us all”, the Chinese President Xi Jinping offered another $60 billion in financing for Africa on Monday and wrote off some debt for poorer African nations”.  He further said that Chinese companies will be encouraged to invest no less than $10 billion in the continent in the next three years” and that “Government debt from China’s interest free loans due by the end of 2018 will be written off for indebted poor African countries, as well as for developing nations in the continent’s interior and small island nations” (Reuters). 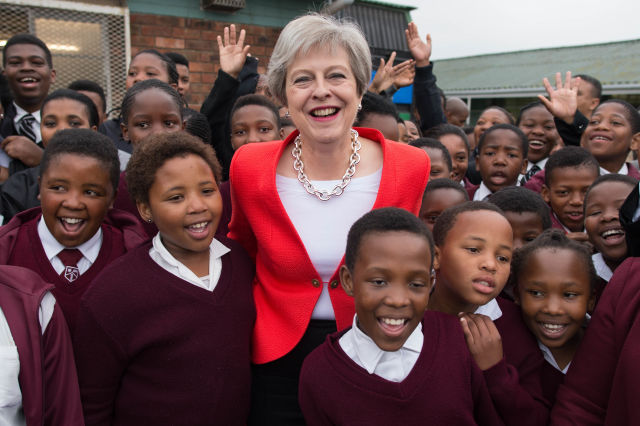 Prime Minister Theresa May meets students and staff at I.D. Mkize Secondary School in Cape Town, which is twinned with Whitby High School in Yorkshire. The two schools are part of a British Council funded teacher exchange scheme called ‘Connected Classrooms’. The prime minister is on day one of her trip to South Africa, Nigeria and Kenya on a trade mission designed to bolster the UK’s post-Brexit fortunes.

Meanwhile, Theresa May was busy promising that “Kenya would retain its duty-free quota access to the UK market”, while China’s president was giving figures that “the new $60 billion will include $15 billion of aid, interest-free loans and concessional loans, a credit line of $20 billion, a $10 billion special fund for China-Africa development, and a $5 billion special fund for imports from Africa. I wonder which one will win the race for the signatures of our leaders; a package of promise or cash on the table? Don’t answer that. Some sceptics cum analysts have even gone as far as describing Theresa May’s recent visit as a bargaining chip; to call off Europe’s bluff in the Brexit conundrum. It is as if to tell Europe that there are other markets outside the European Union. This is hoped to strengthen May’s hand as they come to thrash out the final details of the Brexit deal. 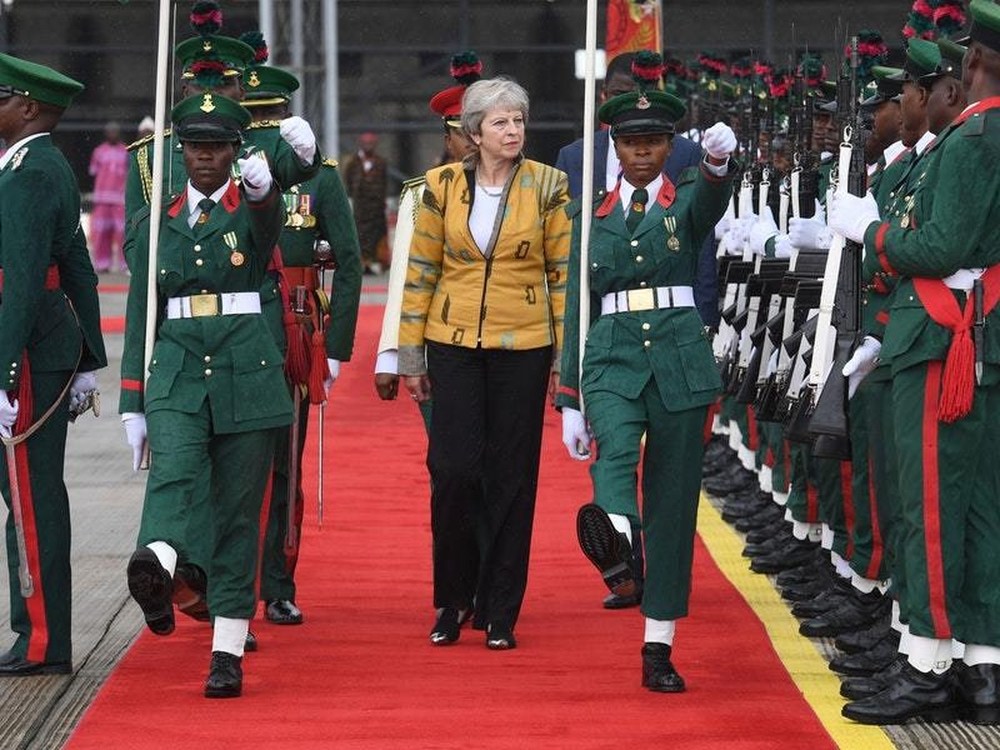 Prime Minister Theresa May arrives in Abuja, Nigeria, on day two of her trip to Africa.

On the other hand, President Xi Jinping’s latest offering will be seen as an answer to the West’s criticism of China that it has been engaging in “debt trap” diplomacy with Africa; which China has always denied. In the same response and unlike past financial packages, the President stressed that “China-Africa cooperation must give Chinese and African people tangible benefits and successes that can be seen, that can be felt,” This could be seen as China’s way of telling the other players that it was in for the long run, and not just for a good time. It is meant to refute the criticism that China indulges in “debt trap” diplomacy.  Xi Jinping even warned against funds going toward “vanity projects”. Now we are talking. 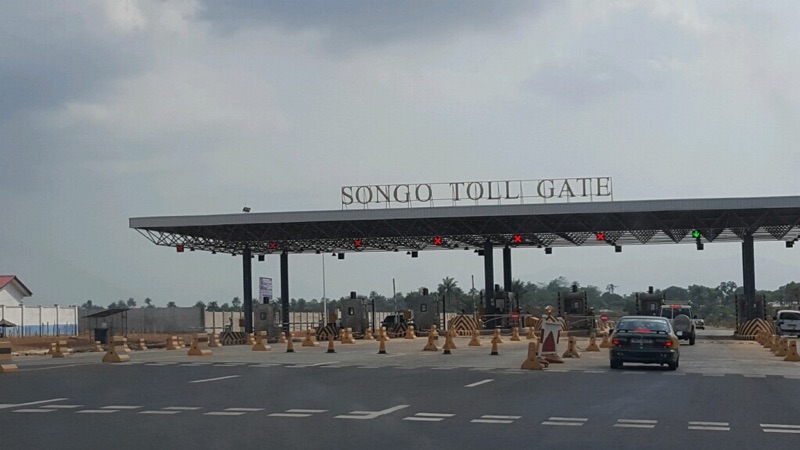 Our former President Ernest Bai Koroma left us a toll road. In most cases, toll roads reduce distances between places. If anything, the toll road would have better served the Magburaka-Mile 91 Road. Where is the congestion or urban sprawl between Mile 38 and Masiaka? How much reduction does it make to your journey time or provide the quickest route to our places of work? These are some of the reasons why countries develop toll roads. From where I am standing, the only reason for the toll road is to serve as a cash cow; period.  The fact that the toll road is here now, many Sierra Leoneans would be hoping that it can be a large source of revenue for the public budget of the country; provided it is implemented correctly; because, it will never improve the logistic efficiency of freight transport in Sierra Leone. Was this one of the projects that Xi Jinping had in mind when he warned against funds going toward “vanity projects”?

But before we sign on the dotted line, let us remember that “Promises make debt, and debt makes promises”.