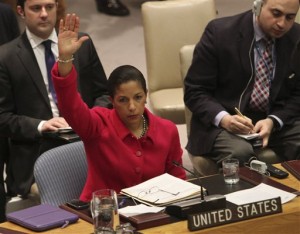 Susan Rice, US Ambassador to UN voting for a resolution against Assad

“The United States is disgusted that a couple members of this council continue to prevent us from fulfilling our sole purpose here addressing an ever deepening crisis in Syria and a growing threat to regional peace and security. For months, this council has been held hostage by a couple of members. These members stand behind empty arguments and individual interests…..” These were the utterances made by the US ambassador Susan Rice, after the council failed to reach a resolution on the Syrian crisis.  By implication, the US and its allies are saying that the ultimate measure of a man is not where he stands in moments of comfort and convenience, but where he stands at times of challenge and diversity. At face value, it is very easy to separate the good willing from the crisis merchants. The US, France and UK among others have expressed their strongest condemnation for China and Russia after the latter blocked a Security Council move for a resolution against President Assad and his regime. But underneath the facade of democracy, it is easy to see that unlike Libya, intervention in Syria may be the final blue torch that may set the region into flames.
Unlike Libya, any intervention in Syria will have far more devastating consequences. In order to clearly look into the Syrian crisis, a simple comparison with other regions where regime change has taken place will indicate a scenario that is littered with a lot of ironies and similarities. In Syria, there are lot of stake holders vying for the fall of the Assad regime. On paper, they might be singing from the same hymn sheet; for Assad to go. But that is where the similarities stop. The anti-regime brigade is made up of defectors who formed the Free Syrian Army, the Syrian Network for Human Rights, the Syrian National Council, the national Coordinating Body, etc. It goes without saying that there are many cooks here with varying interests and “backers”. That is just the Syrian people and hidden among them is the reported involvement of Al-Qaeda; ready to fill any consequential power vacuum. 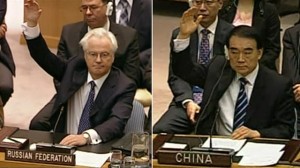 Russia and China voting YES in favour of Assad

In the background are the usual suspects, together with Turkey and the Arab League in the red corner.  In the blue corner are Iran, Russia and China. The only thing separating these playmakers is their varying interests in the region. It therefore becomes disheartening that the Syrian people have become pawns on the political and diplomatic chessboard. There is an African saying that when two elephants fight, it is the grass that suffers. The world may just be witnessing a new version of the cold war re-enacted in open play this time. It is an open secret that countries like Iran, Syria and Iraq have been the political step children of Russia and China. Russia and China have always played surrogate parents to these countries while Egypt, Lebanon, Jordan and more recently Iraq have been adopted by the red corner. The interests in the oil rich region have played a major role in determining the politics at play, as the whole world looks on with eyes wide shut.
Turkey has finally shed its identity crisis, after it failed on numerous occasions for acceptance into the European Union. Reports indicate that Turkey is a strong backer in arming the opposition groups in Syria. When Gaddaffi tried and failed to rally the Arab world against the West, he belatedly remembered that he was an African, and therefore turned to the African continent for recognition. With his petro dollars, it was easy to see how he bought his way into the hearts of African leaders to create his own sphere of influence. With a potential power vacuum growing in the Middle East, Turkey is also vying for a piece of the action. With Saddam and Gaddaffi gone from the scene, it is easy to see why Turkey may be trying to be a big team player in the region. Ironically, the Turkish Kurds may be asking for the same diet as their Syrian counterparts; who Turkey reportedly supports. 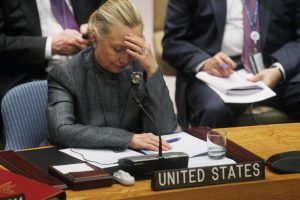 The American Secretary of State, Hilary Clinton in devastating mood after Russia and China voted for Assad