No law abiding person should condone the use of violence in any shape or form. There can be no justification of violence or riots in our community. This brings to mind the senseless loss of lives during the recent riots in the Kabala Townships. Reports have it that a proposed Youth village for Kabala was diverted to some other area in Sierra Leone. The veracity of this story could not be confirmed. However, the thrust of this article is not about how true this was. It is about the misuse of arbitrary power of our police force to use lethal force (pardon the pun) at the slightest ripple of disturbance in our community. There have been several incidents reported about police brutality or their penchant to be trigger happy, with reckless abandon in our communities. What happened to the much vaunted motto of our police force as a “FORCE FOR GOOD”? No one is suggesting that the police cannot use force. In some cases, force is required to deal with crowd trouble. But in doing so, it must be reasonable or better still, proportional. We cannot have a system where the police are the judge and jury. We cannot have a system where the police can arbitrarily shoot and kill people without any accountability.

As Sierra Leoneans, we have to remember that violence was once our staple diet. It is painful to relive such a tragic phase of our history. This article is not aimed at presenting a psychosocial analysis of the situation. Nevertheless, we have to take into cognizance the impact such a tumultuous part of our history has had on our national psyche. There is no running away from the fact that since the rebel war, our country has become comparatively violent. The number of times we hear about stabbings, shootings, armed robberies, violent raping and killing of especially our youth on a daily basis has been alarming. The victims and perpetrators appear to be largely among our youth.

What seems to escape some of our leaders is that, it is these same youths that bore the brunt of the rebel war; as victims and perpetrators in equal measure. During the rebel war, children were forcefully drafted into these vicious webs of violence; and they were the kingpins of most of the atrocities that were unleashed on the society. It is easy for many people to see them as perpetrators. But in reality, these youths were the real victims of the war.  Their childhoods were violently snatched away from them. From an African perspective, and sadly enough, many people fail to recognise the psychological damage that may have been unleashed on these children. These children have to live their lives, growing up as psychologically “damaged goods”. This is no apology or justification for youth violence. 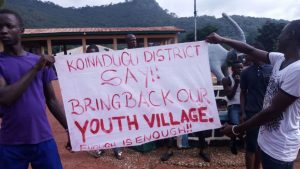 Suffice it to say that our country does not have the kind of facilities to sufficiently rehabilitate them.  As a people, we hardly recognise the need to do so. We know that efforts were made during the heydays of cessation of hostilities and disarmaments, to resettle our youths into meaningful lives. But that was all under the guidance of NGOs and other partners from the Western world. Most of them have left our shores, having laid the groundwork for us to take up the reins. Campsites were built and relocation efforts were mustered. So where are those camps now? Where are these rehabilitation centres?

There is no doubt that it will take a monumental effort to turn the corner. However, with the rate of unemployment flying sky high among our youths in the country, their frustration is understandable. This is not an apology for violence or a free pass to flaunt the law. But equally, we must acknowledge why these youths are frustrated. Having been fed on a diet of violence and lawlessness, their penchant to resort to violence as the first response to a crisis may sometimes be seen by many as a cause and effect equation. There can be no excuse for such behaviour. But we should equally acknowledge the trigger factors in this conundrum. As a society, we need to acknowledge what a decade of war has bequeathed to us. If it had not been for the advent of OKADAS, can anyone imagine what the social landscape of our youths would have been?

That is the paradox of the whole situation. As a result of the OKADA, unemployment among the youths could be said to be relatively reduced. The irony is that, we now have a whole generation that will grow into adulthood, without any form of formal education. How many school going aged youths have abandoned the classroom to make a quick buck riding OKADAS? That is a whole generation lost. What would that mean for our workforce of tomorrow? Have any of our leaders tried to quantify the generational loss to our growth as a nation? Or is it a convenient plaster on cracks of our society? 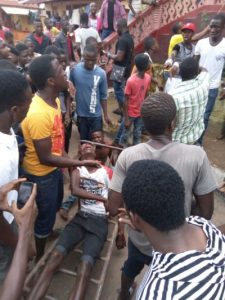 Our police force should rightly be the force for good. They are there to serve the community; to protect life, property and to uphold the law. There is no doubt that they do a difficult job and put their lives on the line to do so. But in doing so, they should be accountable to the very communities that they aim to serve and protect. They have to remember that “The police are the public and the public are the police; the police being the only members of the public who are paid to give full time attention to duties which are incumbent on every citizen in the interests of community welfare and existence.They cannot be above the very laws that they are charged to uphold.”.People should not sleep peaceably in their beds at night only because rough men stand ready to do violence on their behalf.” The police must obey the law while enforcing the law. . When you have police officers who abuse citizens, you erode public confidence in law enforcement.  Returning violence for violence multiplies violence, adding deeper darkness to a night already devoid of stars…(Martin Luther King).

As a nation, we have a right to peaceful protest, with emphasis on the word “peaceful”.  Our constitution enshrines that right. There have been times in our recent past, when those rights have been trampled upon for political expediency. But history shows that “Those who make peaceful revolution impossible will make violent revolution inevitable.” There is always a moral responsibility to disobey unjust laws. But our youths must also remember that to.” Protest beyond the law is a departure from democracy“.  We must learn to say what we want but NEVER say it with violence!”  The father of the American Civil Rights Movement Martin Luther King once said that, “Nonviolence is a powerful and just weapon, which cuts without wounding and ennobles the man who wields it. It is a sword that heals. 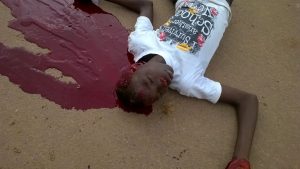 Our youths should also remember that setting buildings on fire or causing wanton destruction are not the answers to our problems. As we struggle for the soul of our country today, and if we are to teach real peace in this world, we shall have to begin with the children. As citizens, we should cherish the status of police officers as keepers of the peace and protectors of the public. Unfortunately, some have occasionally been known to beat to death those citizens or groups who question that status.  That makes the job of good police officers unsafe. Considering that the police force cannot be completely independent of the executive government, is it time for our leaders to look into this sad state of affairs?