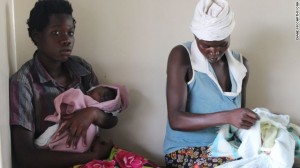 The latest Index by Save the Children, "Surviving the First Day- State of the world's mothers 2013" has shamefully ranked Sierra Leone third in the bottom 10 amongst the worst countries in the world to born a child and to be a mother.

Save the Children’s annual Mothers’ Index assesses the well-being of mothers and children in 176 countries. Not surprisingly, many of these same countries also have very high rates of first-day death, and sub-Saharan Africa also occupies the 10 worst spots on the Birth Day Risk Index . Seven countries – Central African Republic, Chad, Côte d’Ivoire, the Democratic Republic of Congo, Mali, Sierra Leone and Somalia – scored in the bottom 10 of both indexes.

According to the Index, conditions for mothers and their children in these (bottom) countries are grim. On average, 1 woman in 30 dies from pregnancy-related causes and 1 child in 7 dies before his or her fifth birthday. These statistics go far beyond mere numbers. The human despair, lost opportunities and impaired economic growth represented in these numbers demand mothers, families and communities everywhere, be given the basic tools they need to break the cycle of poverty and improve the quality of life for themselves, their children, and for generations to come.

Also, in this index, Save the Children compares first-day deaths of children in 186 countries. It shows that every baby, everywhere, is at great risk of death on the day they are born. Somalia has the world’s highest first-day death rate (18 per 1,000 live births). Somalia is closely followed by the Democratic Republic of Congo, Mali and Sierra Leone which have the second world's highest first-day death rate (17 per 1,000). The index claims, these four countries are also incredibly risky places for mothers. Mothers in Somalia and Sierra Leone face the second and third highest lifetime risk of death in the world respectively. In Somalia, 1 woman in 16 is likely to die in pregnancy or childbirth. In Sierra Leone, the odds are 1 in 23.

Similarly, Poor health among African mothers contributes to high rates of first-day death for babies. For instance, according to the Index, in Sierra Leone, 13 percent of women are stunted – this is nearly twice the rate found in any other African country with available data.

But the question for President Koroma is: with all the million dollars which have been given to his government and the tons of medication donated why has the healthcare situation for children and mothers gone drastically worst? By 2010 when the free health care initiative was launched, the under 5 mortality rate for Sierra Leone was 174 per 1,000 which was the fourth highest in the world. In 2013, the same mortality rate has increased to 185 per 1,000 making us the highest mortality rate in the world. Also, in the 2012 State of the World's Mothers index, Sierra Leone was ranked outside the bottom 10 worst countries but this year (2013) we are ranked third in the bottom 10 of the worst countries to be born a child and be a mother. Therefore, President Koroma needs to give account for all the millions of dollars and tons of medications he has received for the health care of children and women as Sierra Leone ranks the world's third worst country to be born a child and to be a mother

The above article is published verbatim; facts and figures were researched by the author, Josephine Koroma, and they were not cross-checked by CEN before publishing.