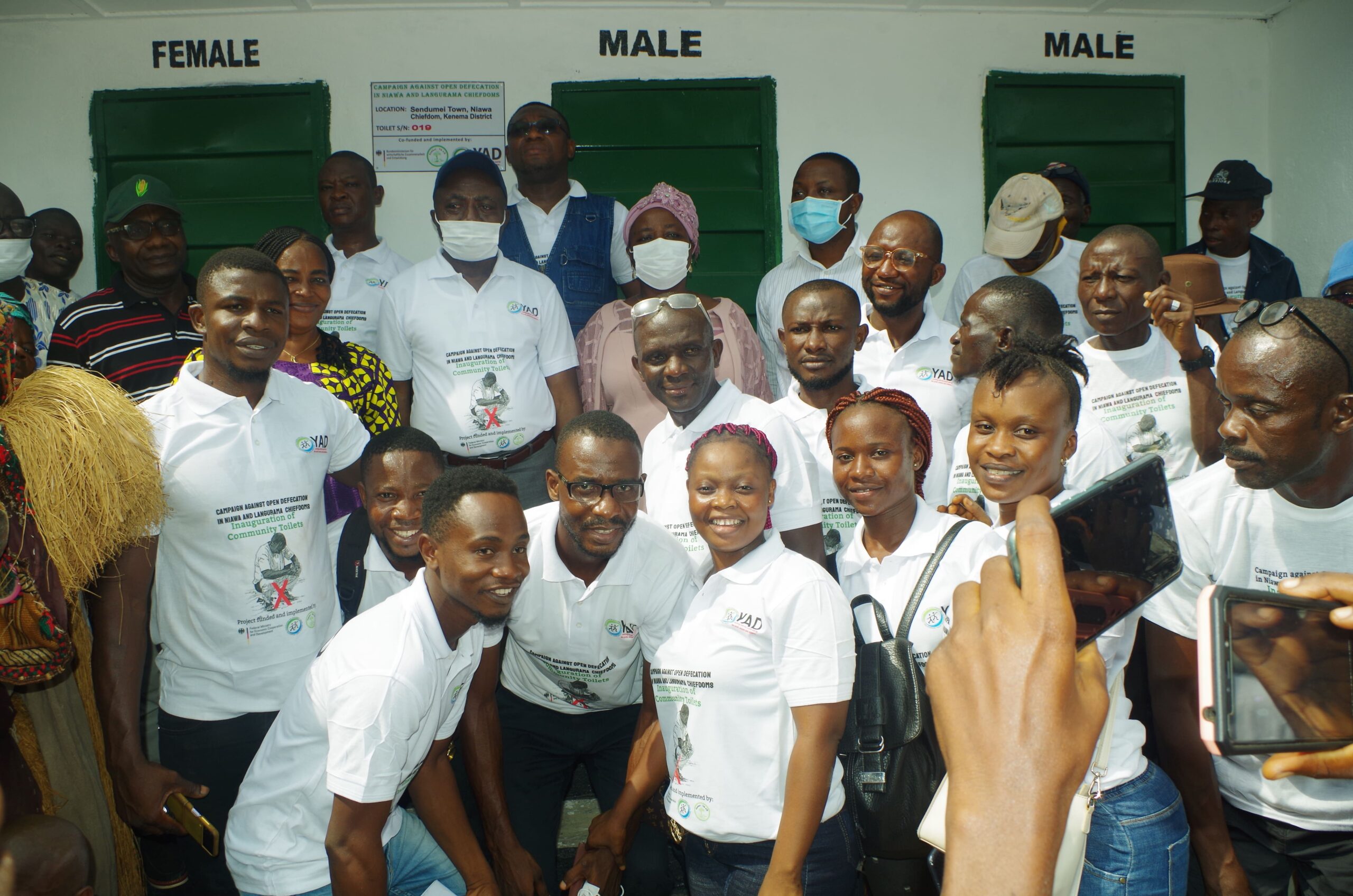 The inhabitants of Niawa and Langurama Chiefdoms have started celebrating Christmas before due as they formally received today, Monday 20th December 2021, 49 blocks of community toilets constructed in all communities across the two chiefdoms by Youth in Action for Development (YAD).

In her welcoming address, PC Tamia welcomed all dignitaries to her chiefdom and further acknowledged the tremendous contribution YAD has done over the years to socioeconomic development in her chiefdom, ranging from construction of primary and secondary schools, teachers quarters, community centres, grain stores, water wells, agriculture and delivery of hospital equipment to many Peripheral Health Units (PHU) across the region. “The current project”, she said, “is one of the most felt needs of my people as the lack of proper household hygiene had led many poor families over the years to hospital beds with little or no resources to afford the bills”. She further described the project as timely because it was inaugurated when Christmas was just around the corner when we expected our brothers and sisters to come from the cities to spend holidays with us. The lack of decent toilets and shower facilities have been a great embarrassment for every household. 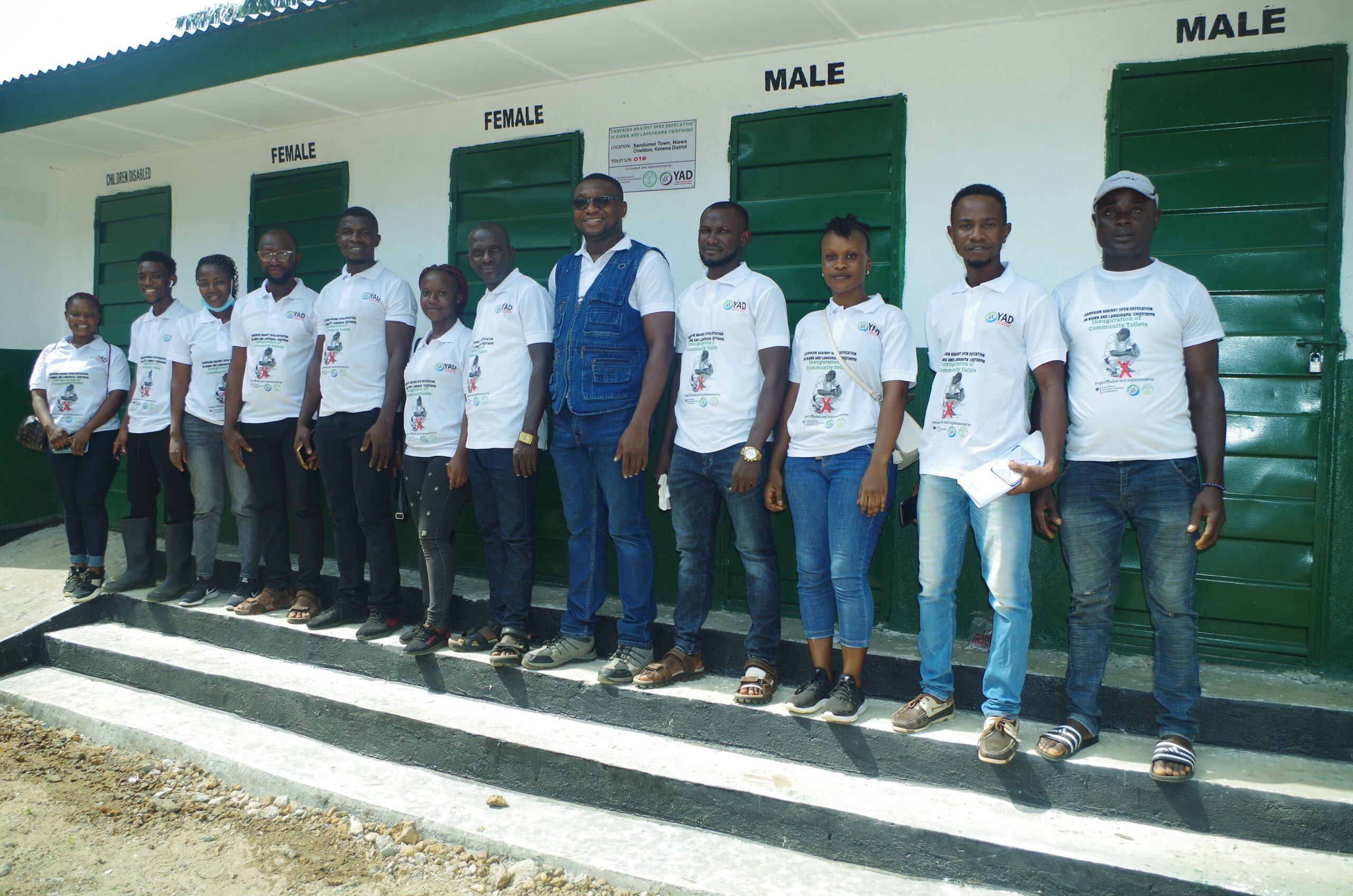 Highlighting the background of the project, the Programme Coordinator, Othman Sheriff explained that the primary goal of this project is to improve community hygiene and reduce the spread of infectious diseases in all villages across the two chiefdoms. Titled Campaign against Open Defecation (COD) in Niawa and Langurama Chiefdoms, he further explained that the project is co-funded by the Federal Ministry of Economic Cooperation and Development (BMZ) of the Federal Republic of Germany, Fambul Tik e.V. and YAD, and it entails 49 blocks of toilets with 245 squat holes befitted with bathrooms, septic tanks, water tanks, rain harvesters; and extensive capacity building in household hygiene and sanitation for key stakeholders and Community Hygiene Monitors (CHM) who are expected to serve as permanent custodians of the facilities in order to ensure long term sustainability.

Sheriff further explained that the project was carefully authored based on thorough observations and series of consultations with both beneficiaries and key stakeholders. “We know that many NGOs have formulated and implemented projects in diverse ways to eradicate open defecation in many communities across the country”, he said, “but what makes ours different from the rest is that we are implementing it in our own households where we were born and raised”. Thus our approach is not only to provide the most needed toilet facility but also to provide intensive capacity building for the users, and rigid bylaws that can govern the usage”. The bylaws were then read openly and ratified by all stakeholders present at the occasion. The bylaws read: 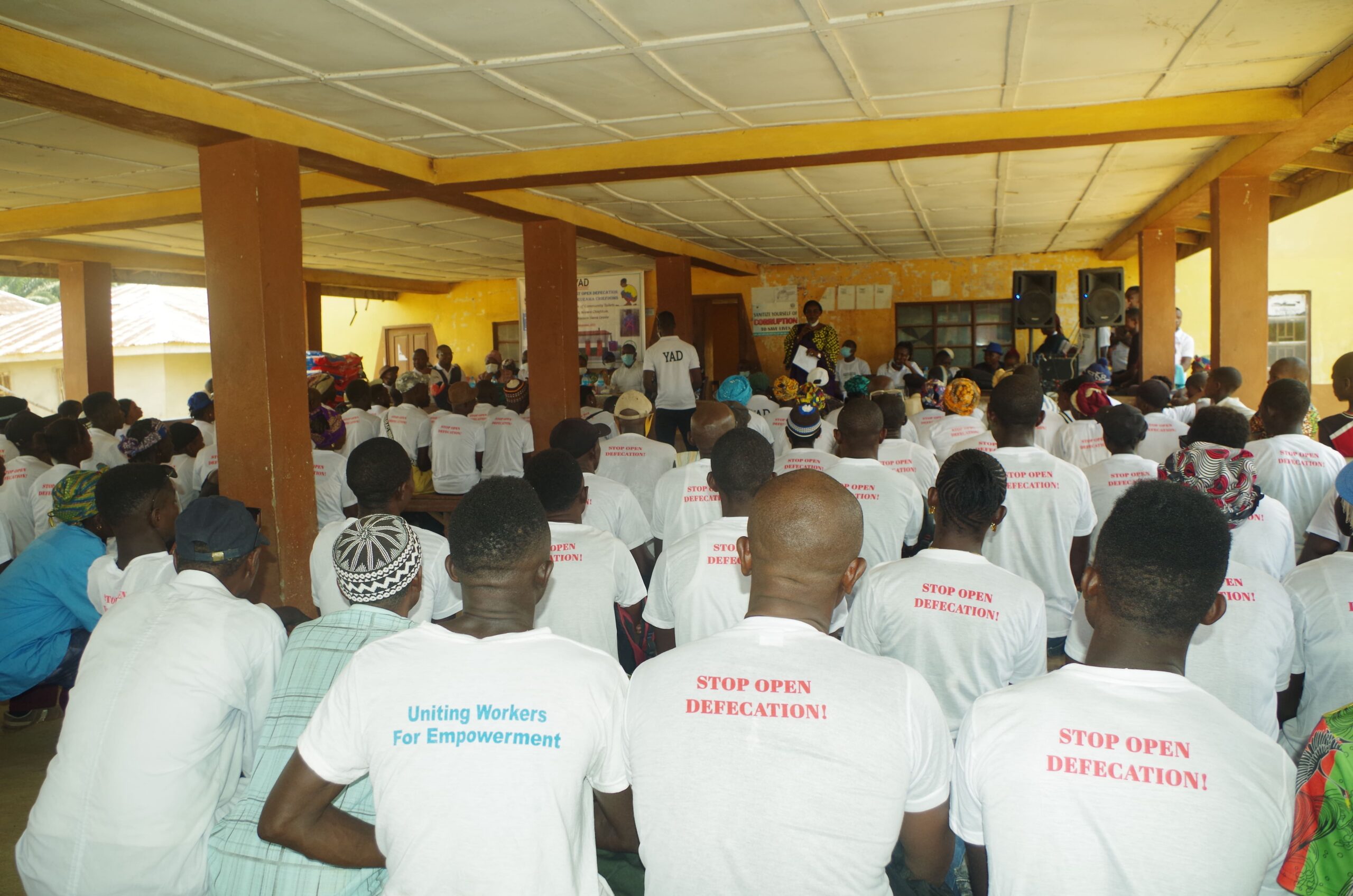 “ Bylaws Governing the Safe and Effective Use of Community Toilets Constructed by Youth in Action for Development (YAD) in 22 communities in Niawa and Langurama Chiefdoms, Kenema District

Following the successful construction of 49 blocks of toilets with 245 drop holes in 22 communities across Niawa and Langurama chiefdoms, it has been unanimously agreed between the implementing agency, Youth in Action for Development (YAD), and stakeholders of the targeted communities to institute the following bylaws in order to ensure the effective and sustainable utilization of the facilities:

The above bylaws have been read and interpreted in Creole and Mende languages which are the normal linguafracas in the affected communities, and they acknowledged having clearly understood it and hereby signed:”

Responding as the key representative of the Ministry of Health and Sanitation in the region, the District Medical Officer, Dr. Donald Grant described the project as unique in nature and innovative in style as it has complemented his efforts in ensuring household hygiene and environmental sanitation across the targeted communities. He further commended YAD for instituting such an effective monitoring procedure that shall ensure the future sustainability of the facilities.

Speaking on behalf of the Kenema District Council, the district chairman, Mr O’Level Sesay thanked YAD and its donor partners for such an innovative project and further pleaded that they try and scale it up so that the entire Kenema district can become the first open-defecation free region in the country. He further acknowledged YAD as one of the few organizations that are doing tremendously well in the region as they constantly complement the central government’s efforts in diverse fronts. “What makes YAD extraordinary among others are the unique nature of their interventions and their norm of consultation with the council when formulating their projects. This tells that they are truly committed to complementing efforts of the central government to push this country forward as they tailor their projects within the national strategic development frameworks”, he lamented.

In his keynote address before formally cutting the ribbons, the Resident Minister – East, Hon. Andrew Ansu Fatorma thanked the management of YAD, Fambul Tik and BMZ of the government of the Federal Republic of Germany for their continued support to the Sierra Leonean community in general and Kenema district in particular. Hon. Fatorma further urged the local stakeholders to uphold the bylaws instituted to govern the community toilets, adding that his office shall give them all supports needed in the implantation process. He further appealed to YAD and donor partners to scale up what he called “a very innovative project” and “desperate need of the poor” so that the entire country can copy in subsequent years.

Added to the toilets, YAD donated 23 bags of dust soap, brushes, buckets and detergents to be used in the toilets; and syringes, cannulas, first aid kits and other essential medical stuff costing thousands of Euros to be used at various peripheral health units (PHU) across the chiefdom.

The occasion was chaired by Mrs Aminata Sheriff, the Regional Coordinator of NACSA.