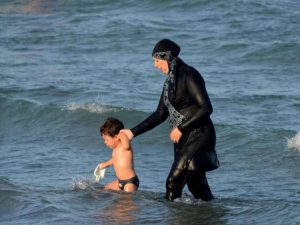 The recent ban on what many will see as the aptly named BURKINI swimwear has become a tilting point in the history of France. There is no doubt that France has unfortunately bore the brunt of extremist barbarity in recent times. Dozens of people were killed, including children, when a lorry driven by a 31-year-old Tunisian man, Mohamed Lahouaiej-Bouhle  ploughed into a large crowd watching a fireworks display in Nice to mark the Bastille Day holiday, on 14 July. On July 26, two 19-year-olds pledging allegiance to Islamic State (IS) slit the throat of Father Jacques Hamel in his church. Absolute madness! France emerged from one of its worst security crises in decades after three days of attacks by gunmen brought bloodshed to the capital Paris and its surrounding areas. It began with a massacre at the offices of satirical magazine Charlie Hebdo on Wednesday 7 January and ended with a huge police operation and two sieges two days later.  One of the fundamentalist explanations for extremism has been that, they detest the way of life in the West. Those who planned and carried out the worst terrorist atrocity in the USA (9/11) were primarily of Saudi decent. One of their reported arguments for such wanton destruction was that, the west was importing “its way of life into the Holy Kingdom”. These included the dress sense, alcohol and practically anything western.

The lessons learned and resultant values from the French Revolution (1789-99) — Liberty, Equality and Fraternity — were followed by other European nations, and continue to be the foundation of France’s political theatre. So one would wonder why that renders France to be the focused target of religious extremism and IS madmen. With the recent attacks in France, it is understandable that the country needed a swift and effective response, not only to ensure that such attacks are no longer repeated on the streets and communities or anywhere else in society but also to re-assure its citizens against such acts. But in doing so, we should be careful not to pander to the very extremist’s views that threaten to divide us as a society.

France was one of the first countries on this side of the sea to make it illegal to wear the “Burqa “in a public place in 2010. The European court of human rights (ECHR) upheld France’s burqa ban, accepting Paris’s argument that it encouraged citizens to “live together”. The rationale for the ban was all about “integration”; one of the arguments that is generally bandied around as reason, for the disaffection felt by  those in the business of committing such atrocities.  Those who opposed the ban  argued that  it was “inhumane and degrading, against the right of respect for family and private life, freedom of thought, conscience and religion, freedom of speech and that it was discriminatory”.

In case you did not know, the Burqa is an attire worn, covering the entire head and body, and the niqab, leaving only the eyes uncovered. Ironically, this same law applied to balaclavas and hoods. How come there were no oppositions to the latter. It was not surprising that the French government asked the court to throw out the case, claiming that the law was not aimed at the burqa or veil but any covering of the face in a public place, and also applied to hoods and helmets when not worn on a motor vehicle. Many will rightly see this as a legitimate argument while some may beg to differ. The French government and proponents of the ban see it as a way of “helping everyone to integrate”. “It’s about social communication, the right to interact with someone by looking them in the face and about not disappearing under a piece of clothing.” How ironical.

But with the recent attacks in France, it is understandable that the government is making every attempt to dispel the charge of marginalisation of certain parts of the society. The recent attacks are bound to evoke emotions, but in trying to address such issues, care should be taken not to undermine the very foundations upon which the French, and to a large extent Western democracies have been built. From a literal point of view, the term “BURKINI” looks like a clever concoction of “BURQA” and “BIKINI”. Technically, you would say that it is a symbol of INTEGRATION; a confluence of two diametrically opposing types of attire. While the “BIKINI” is a symbol of “if you’ve got it, flaunt it”, others will see the “BURQA” as “if you’ve got it, hide it”. As opposing as they may seem, the “BURKINI” may symbolise integration to many.

I can’t remember the last time I saw a Muslim woman in beachwear in Saudi Arabia, the supposed bastion of Islam. What the burkini may have offered Muslim women is the opportunity to inculcate some aspects of Western life, but at the same time maintain what many will argue, their modesty. In my book, it is the best of two worlds. There can be no better example of integration. Can you imagine how the extremist will frown at such Muslim women wearing a burkini to the beach? There have been a lot of accusations that moderate Muslims have not raised their voices enough to condemn atrocities in their name. Since the tragedies in France and elsewhere, islamophobia has gone up a notch. In Britain, there has been a steady rise of Islamophobia and xenophobia since the referendum. It is an open secret that Brexit was fought on the platform of immigration, among others. The outcome of the referendum has been seen by many as a tacit approval or acceptance of the majority of British people, who sees immigration as a problem. Others may beg to differ.

But what are the implications of the attempt by France to ban the BURKINI? For starters, it goes against every grain of Liberty, Equality and Fraternity. There is this notion that Islamic terrorists want to change the way of life in the West; that the Islamic terrorist wants to promote Sharia law in the West. But by banning the Burkini, are we not pandering to the very base instincts of extremists? In Saudi Arabia, women are still fighting for the right to drive. Can you imagine how many lifetimes it will take for Burkinis to be allowed on some beaches? By banning the Burkini, what is the message that the French authorities are sending to moderate Muslims, who are equally affected by the atrocities. In real terms, there have been more Muslims killed by these terrorists than any other denomination. Take the combine death toll in Syria, Libya, Afghanistan, Iraq, Yemen, Egypt, Somalia, Nigeria, The Philippines and Turkey. How many Muslims have lost their lives, thanks to the bombings by terrorists?

So what will the French police do when they find a male surfer in full speedo swim suit and a Burkini clad woman on the beach together? Are we about to see ONESIES banned on beaches? A French court has overturned a ban on burkini in Nice, concluding that the decree against the full-body swimwear was illegal because there were no proven risks of disruption to public order. The court also ruled that “in the absence of such risks, the emotions and the concerns resulting from terrorist attacks, and especially from the attack on July 14, are insufficient grounds to legally justify the contested ban. “It also found that Burkinis posed no risk to “hygiene, decency or safety when swimming”. (Al-Jazeera) Since the court ruling, bans on the women’s full-body swimsuits have so far been lifted in Villeneuve-Loubet, Cannes, Frejus and Roquebrune.

The lessons that can be learnt from this ugly saga are that, in responding to terrorist attacks which carry significant emotional weighting, care should be taken not to unconsciously pander to the very instincts of those that promote chaos. Care should be taken not to further marginalise the moderate Muslims who see integration as the way forward. Tarring every Muslim with the same brush could not only be counter-productive, but could also be tantamount to providing oxygen for extremist views. Finally, it could also negate the very foundations of the free world. You cannot preach integration and practise segregation at the same time. The natural evolution of society is integration; and it should neither be political, nor theoretical. We should learn to live by what we love, not by what we hate. Because when unity is evolved out of diversity, then there a real and abiding national progress.