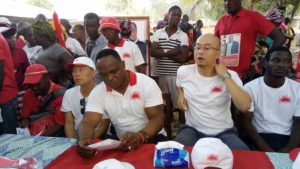 The social media has been flooded with photos of Chinese nationals actively participating in our political discourse recently. Many people have not only found this surprising but also appalling. There is a general impression that this is an affront on our political make-up. What makes the images gnawingly galling to the pith is the fact that this is coming hot on the heels of some constitutional gerrymandering by the APC party. Our respective parties have recently concluded the legal nomination process. But even that has been spiked with protests and petitions against other politicians from especially the APC. We have just seen how many Sierra Leoneans were disenfranchised, rightly so I may add, by some selective constitutional applications. We agree that the constitution takes a dim view of people with dual citizenships attempting to occupy prominent roles in our political blood stream. It goes without saying that even though the constitution appears to have been rightly applied, it is the timing and selective amnesia of the ruling party that has left a bitter taste in the mouths of the public.

The influx of workers from China is receiving a mixed reception in Sierra Leone and Africa, where people both admire and resent the hard-working newcomers’ pursuit of wealth. But if we are to ensure the sustainability of our China partnership, a major concern needs to be addressed: Corruption. Corruption has thrived in our current climate with political and economic impunity; and this has created and increased poverty and exclusion. While corrupt individuals with deep political ties have enjoyed lavish lifestyles, millions of Sierra Leoneans are deprived of their basic needs like food, health, education, housing, access to clean water and sanitation. Violence and crime across the country derail efforts to encourage community building and foreign direct investment. If these problems are left unaddressed, the misunderstandings – and potentially serious long-term social issues – could weaken the overall sustainability of the Sierra Leone-China relationship.

Chinese aid to Africa has been criticized as being a form of economic colonization in some quarters. We know that from time immemorial, political aid has been used to create strong bilateral ties between African countries and China.  Many are quick to highlight the structural benefits brought about by aid; but downplay the benefits to China in the form of profit, resource extraction, and the acquisition of service contracts to Chinese companies. In a nutshell, we know that whichever country offers the greatest economic gains based on China’s growth strategy becomes a target for aid. It is an open secret that this strategy is geared towards partnering with resource-rich countries like Sierra Leone, which lacks the political and economic structures required to efficiently and effectively manage our bilateral trade opportunities. The key challenge we face is to ensure that there is an effective political and economic strategy to piggyback off Chinese intervention to ensure broad based economic empowerment.

It is understandable if immigrants in Sierra Leone have a soft spot for certain political parties. I don’t usually use the word “immigrant” for others. I am used to being described as such. So please indulge me to enjoy it for once. But back to the point, it is not criminal for such immigrants in our country to have their own political persuasion. But it is not common to see such immigrants clearly flaunting their support for a particular party. The photos showing Chinese nationals openly taking part in our national campaign rallies is a break from tradition. There are many who would be surprised at this brazen show of support.

It is no secret that the Chines are now our biggest partners in our development process. We know that the Chinese have invested a lot of money and effort in almost every sphere of our social-economic life; ranging from mining, business, infrastructure etc. The majority of Sierra Leoneans are very grateful for this. The Angolan president Jose Eduardo dos Santos recently said that, “China is now a vital partner for the development of our continent. To confirm this, just keep in mind that since 2013 China has become the largest trading partner of Africa and has increased by more than 44 percent of its direct investment in the continent.” The Republic of Congo’s President Denis Sassou N’Guesso said that “In recent years, we have seen that China is on the ground, providing massive support to development efforts in African countries. There are statistics to prove this; the projects are visible, from one country to another.” These facts are undeniable.

The Chinese have always been seen by other Western countries as politically immoral. Unlike the other western nations, they have been criticised for not attaching good and democratic governance as a caveat for international cooperation with African leaders or countries. The Chinese have been known to do business with the worst dictators in Africa. They have never been known to interfere in the domestic political affairs of their host countries. They have been known to do business, and only business; irrespective of whether the leaders are autocratic, despotic, and dictatorial or chairmen for life. It is against this backdrop that many find this recent trend nauseatingly frontal.

But if we are to consider the amount of Chinese investment in our country today, many would find their recent forage into our political affairs understandable. Many will see this as reflective of the society for self-preservation. By implication, others will see their interference as merely “protecting their interests”; and many may not begrudge them for that. The increased Chinese presence in our country and the majority of its contracts has been signed with the ruling party. So is it in their interests that the ruling party stays in power? Don’t answer that.

The influence and presence of the Chinese in our country is as obvious as daylight. But do they feel compelled to actively engage in our politics. Is this an act of desperation on the part of the Chinese or the government? In spite of their visible presence in our country, there are many who feel that our country has been disproportionately mortgaged to the Chinese. Rumours have it that our country has been saddled with debts to the Chinese, and that it will be paid for by generations to come. From the toll road, the roads, the Bandasoka hydro in Port Loko, and the recently touted airport at Mamamah, are just a few that have been peddled. It is inconceivable that anyone would object to these “developments”. But will the Chinese go further to demand good governance, zero corruption, equity etc.,  to ensure that this partnership benefits the majority  and not the few?

Many believe that the contracts for these projects, although vital, have been badly negotiated to the detriment of the country. Others feel that the tax brackets and sweeteners of the mining contracts are pittance to the country. Many feel that certain individuals have personally profited from most of these contracts. Rumours have it that on the eve of the dissolution of our parliament, the government has hastily signed various mining contracts with the Chinese. Take for example the buses that were purchased for our national transport ministry. Most of the buses have since become eyesores in the graveyard of the transport ministry. It is this lack of value for money that has left a bitter taste in the mouths of many. It is no wonder that some have a negative view of the Chinese partnership.

We need to replace our clan based economic feudalism with an economic empowerment, which will in turn promote political development leading to a healthier international trade relations. Our partnership with China can definitely provide an employment sponge to absorb our labour market. As a country, we need to be competitive in this partnership. Sierra Leone may be at the tip of an economic renaissance that will see opportunities being created that were considered impossible a few decades ago. But, this requires strong leadership in both politics and business. As citizens, we should be able to hold our political leaders accountable, specifically to promote broad-based economic empowerment, to ensure that the maximum number of people benefit from this growth. I think, China can help us here from the top, not at grassroots level with campaigning.

The irony is not lost on many Sierra Leoneans; especially those in the diaspora. While the ruling party is spending time telling their citizens abroad that their Sierra Leonean citizenship is questionable; thanks to some constitutional gymnastics,  it is apparently opening doors to non-citizens like the Chinese, to participate actively in determining who leads our country for the next 5 years. What a cheek. There are some who actually see this as the re-colonisation of our country; Chinese style. If one can tell a fellow Sierra Leonean, who was born and bred in Sierra Leone that they do not have the right to actively participate in their country’s political discourse, thanks to their dual citizenships, where is the moral platform to encourage others that were neither born, nor bred in our country to do so? Double standards come to mind here.

The recently concluded American presidential elections continue to be saddled with the allegations of Russian interference. Are we witnessing a similar case with the Chinese here? While the Russians are accused of doing so by cyber means, it looks like ours is “gbangba oday”. What a cheek. For all I know, the Chinese are more than welcome. We are seeing tangible results from their partnership. The worry is; at what price? Are we being short-changed here? You be the judge.